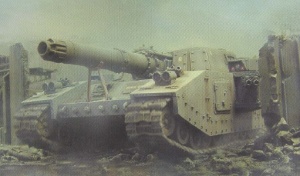 The Shadowsword (also spelled Shadow Sword[4][11]) is an Imperial Guard super-heavy vehicle based on the same chassis as the Baneblade.[11]

The Shadowsword design has existed for as long as the Baneblade and the the two are described as "sisters".[12] While based on the same STC data as the Baneblade, the Shadowsword is specifically armed and equipped to hunt and destroy enemy Titans. For this reason they are only constructed on Forge Worlds which raise Titan Legions and deployed to support forces expecting to face these war engines.[1a][2]

The Shadowsword is primarily distinguished from its sister design by its main weapon, the Volcano Cannon. This massive laser cannon can tear off a Titan's limb with a single shot and is assisted by advanced logis-engines and targeting equipment for accurate long-range fire. The power needed to produce this devastating blow is drawn from the Shadowsword's capacitors, which themselves draw power from the tank's engine, however just one shot will completely drain them. In order to recharge the capacitors the engine's main drive must be disconnected and the generator connected in its place, rendering the tank stationary. This process is overseen by a dedicated Enginseer, whether an actual member of the Adeptus Mechanicus or a highly-trained Imperial Guard specialist, who monitors the power flow from engine to generator and otherwise helps maintain the vehicle.[1a] On average it can take a Shadowsword two minutes to fully charge its four-terawatt capacitors, assuming its systems are functioning normally.[8] Because of its slow rate of fire the Shadowsword often operates with lighter vehicles who protect it against enemy assaults and help initiate an attack on an enemy Titan. While the Shadowsword lies in ambush the smaller vehicles attempt to strip the enemy's Void Shields at which point the Shadowsword may deliver the killing blow.[2][3]

For defence, the Shadowsword has two remote-controlled side sponsons[1a] fitted with Twin-linked Heavy Bolters or Heavy Flamers. Some Shadowswords will instead replace these sponsons for extra armouring or add a second set of sponsons, each fitted with the same weapons as the originals. In addition to this, many crews will install a pintle-mounted Storm Bolter or Heavy Stubber, and/or a Hunter-Killer Missile on their tanks. Finally, all Shadowswords are equipped with Smoke Launchers to increase survivability and a Searchlight for night-fighting.[3]

Like the Baneblade a "true" Shadowsword will have its own number and name and be registered on Mars, where all of its deeds shall be recorded regularly. So-called "counterfeit" Shadowswords are produced by Forge Worlds which don't have access to the same STC data and are consequently less advanced than those which have been properly constructed and consecrated: their logic engines and targeters will be more primitive, their capacitors or engine less efficient, their remote-controlled sponson weapons replaced with crewed versions, and the Volcano Cannon may be replaced with a large Plasma Cannon, a huge Battle Cannon or a Turbo Laser.[1a] 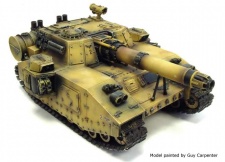 There are inconsistencies in the data for the weight of the Shadowsword tank: while originally the weight was said to be "a thousand tons"[11], in later publications it was scaled down to 308 tons[12] before going up again to 316 tons.[1a]