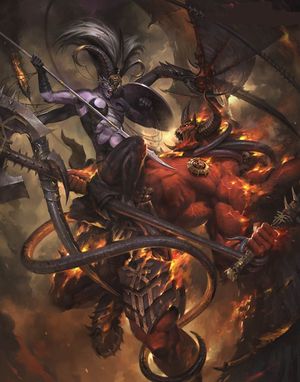 Shalaxi Helbane, known as the Monarch of the Hunt[3], is a Slaanesh Keeper of Secrets and is the undisputed martial champion amongst the Chaos God's Daemons.[1]

Shalaxi was created by Slaanesh to fight and defeat rival Greater Daemons, especially Khorne's Bloodthirsters, and Shalaxi has bested some of the most formidable adversaries in the galaxy. If rumours are to be believed, this includes the dreaded Bloodthirster Skarbrand itself.[1]

Some six hundred years before the formation of the Great Rift, Shalaxi Helbane was banished to the Warp by the Grey Knights. Angered, Slaanesh imprisoned Helbane in the Palace of Punishments. However Slaanesh eventually judged that Shalaxi had atoned for its failure, and dispatched the Daemon to halt the rise of Ynnead and foil the plans of the Ynnari. The Daemon was able to travel to Belial IV and steal the fifth Crone Sword, placing it far from the reach of the Ynnari in the Palace of Slaanesh.[3]

Helbane gathered many old allies to its cause - amongst them Syll'Esske and a warband of Slaaneshi Heralds. Entering the Webway, Helbane was able to use its synathestic ability to track Yvraine's soul-trail. Helbane tracked down the Ynnari leader to Threccia. However Yvraine was able to escape as Shalaxi raged.[3] Shalaxi was later againa ble to corner Yvraine on the world of Iathglas. During the subsequent battle, the creature managed to hold off the combined forces of Yvraine, Yncarne, The Visarch, Jain Zar, Lelith Hesperax, and a Solitaire. Shalaxi was apparently defeated, but revealed that it had only been an illusion solid enough to give good sport and little else. Helbane gloated that Slaanesh considered the Ynnari little more than playthings as its glamour vanished, pledging to one day slay Yvraine.[3a] 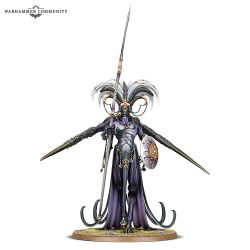