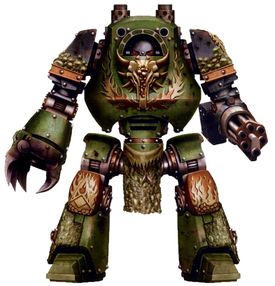 Ancient Grenn, originally Shar'rac Grenn, was a Contemptor Dreadnought in the Salamanders Legion, during the Great Crusade and Horus Heresy. Before becoming a Dreadnought, Grenn was the Consul-Centurion of the Realm of Epithemus, who was also well-known and respected for his devotion to both duty and the teachings of his Primarch Vulkan.[1]

During the Horus Heresy, Grenn managed to escape the Dropsite Massacre on Isstvan V, with a handful of fellow Salamanders from the Cadre Sulphaeon. They then found refuge on the world Dominica Minor and it was there that they heard rumours of Vulkan's death and of the total destruction of their Legion, at the hands of Warmaster Horus' forces. When Mortarion and a Death Guard fleet later appeared in orbit above Dominica Minor, Grenn and the Cadre Sulphaeon pledged to die defending their refuge, rather than flee before their Primarch's murderers.[1]