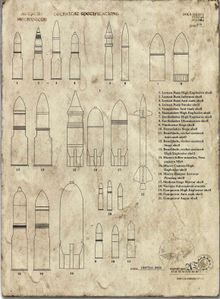 A variety of Imperial Guard Shells.[1]

Shells are explosive munitions used by a variety of forces across the Galaxy.[1]

Imperial Shells operate on the same basic principle that has been used for millennia. The Mechanicum's policy of shell manufacturing is one of simplicity of production and the repetition of practices passed down across generations. Most Imperial Shells possess a ballistic cap, fuse, explosive material, shell casing, propellant charge, and tracer.[1]