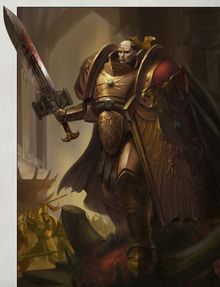 Shield-Captain is a rank of the Adeptus Custodes.

The rank in truth is more of a general classification to refer to a series of command ranks within the Custodes, ranging from Prefect, Lictor, Proconsul, and Tribune. This is purely a martial rank and signifies the Custodian is worthy of leading a force of his peers into battle. Many Shield-Captains hold a variety of simultaneous ranks. Regardless of what formal title is used, all Shield-Captains are the greatest among the Custodian Guard.[1b]

More than just exceptional fighters, Shield-Captains are highly intelligent and tactically gifted commanders, able to read the ebb and flow of the wider war at a glance and direct their forces accordingly. They know neither fear nor self-doubt, and can appear arrogant and aloof to other warriors of the Imperium. This is a misconception however for Shield-Captains are untroubled by such self-serving notions as ego. They are absolute realists, fully aware of the stakes involved in the wars they wage. Nonetheless they do not lack charisma. Rather, they exude it. To the common soldiery of the Imperium these gilded figures seem to have stepped from the pages of religious scripture. Their presence fills faithful men with euphoria, banishing fears and doubts, replacing them with the absolute certainty that the Emperor watches over his servants and will preserve their souls should they fall in battle that day. Shield-Captains are also master diplomats, well versed in the intricacies of Imperial high society, privy to secrets and traditions that allow them to charm, inspire, threaten and manipulate as required to see their will done.[9a]

In battle, Shield-Captains typically lead a detachment[1a] or squad of Custodes.[3] It is not uncommon to see a multiple Shield-Captains in battle, nor is it for one to command others - groupings such as the Golden Brothers or the Heralds Three have won remarkable renown through their impressive accomplishments. This does not result in any tension, for the Shield-Captains are frank in discussing their respective merits and quick to recognize their own strengths and weaknesses.[9a]

Shield-Captain mounted on a Jetbike

The Tribunate are the highest ranking Custodians after the Captain-General himself. During the Great Crusade they were a senior cadre of around ten individuals who formed the Legio's council on war and policy.[1a] After the Horus Heresy, the Adeptus Custodes maintain two Tribunes, one of whom serves as master of the Hetaeron Guard.[7]

The Prefectorate were senior Shield-Captains during the Great Crusade. The rank of Prefect was conferred on a Shield-Captain as a mark of veterancy and the Emperor's favour.[1a]

Titles known to be held by Shield-Captains include: