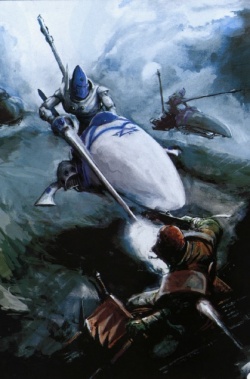 The Shining Spears are a rare type of Eldar Aspect Warrior, embodying the spear of Kaela Mensha Khaine which struck like lightning and kill an enemy with a single blow. The Shining Spears carry the fight directly to the enemy, pouncing upon them without warning to deliver a killing blow.[1][2a][3a]

The Shining Spears Phoenix Lord Drastanta has been missing for many years since the battle against N'Kari that saw Asurmen slain by his own error.[6] The Shining Spears have only a tiny presence on a few Craftworlds, including the major ones such as Ulthwé, but are regarded as an elite force, glittering exemplars of the warrior way.[4] While Shining Spear squads are relatively small, just three to five warriors, a number which sometimes includes an Exarch to lead them,[3b] their mastery of the Eldar Jetbike is so complete that each one can execute complex high-speed maneuvers with but a single gesture. In this way even a small unit of Shining Spears can turn the tide of battle, delivering a devastating charge against the enemy before wheeling around for another attack, much like Exodite Dragon Knights.[3a] Apart from the twin-linked Shuriken Catapults incorporated into their jetbikes, the ritual weapon of the Shining Spears is the Laser Lance, an elegant weapon used to deliver short-ranged energy blasts sufficient to pierce even the thickest armour.[1][3a] Their Aspect Armour is traditionally painted white.[2b] 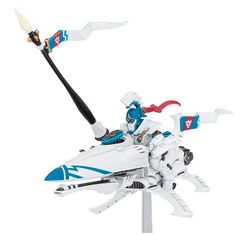 Exarchs are individuals who are lost upon the Path of the Warrior and permanently become the bloody high priests of Khaine. Their training continues towards mastery of their given Aspect, and their armour is a more ancient and elaborate version of those worn by regular warriors. It also contains numerous Spirit Stones containing the souls of past Exarchs, who provide the new occupant with guidance and a pool of raw psychic energy.[Needs Citation]

The riding skills of a Shining Spear Exarch outmatch even the extraordinary skills of regular Shining Spears, able to lead their squads unerringly around any obstacle, through the roughest terrain with little difficulty, and know the best moments to safely withdraw from close combat to deliver another devastating charge.[3a] Instead of a normal Laser Lance the Exarch can wield a Star Lance or Power Weapon, and his Khaine's Lance Jetbike can replace its catapults for a much stronger Shuriken Cannon.[3b]