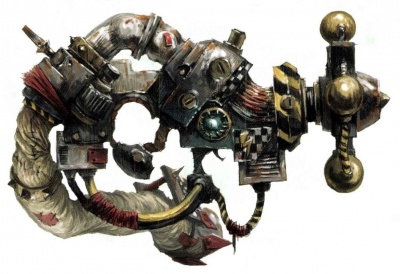 The Shokk Attack Gun is one of the most bizarre weapons the Meks have ever invented. It serves as a great example of just how deep Meks' innate understanding of technology lies and how they use it solely for creating weapons of mass destruction.[3c]

In appearance it is a large, heavy piece of machinery with huge, spinning blades at the front and numerous whirring, grinding cogs and other gubbins sticking out from the casing. When used it makes a distinktive whine, shakes and rattles in an alarming fashion, oily smoke pours from inside as its Mek Operator holds on as tight as he can. It is very hard to aim with a Shokk Attack Gun, as even the strongest Orks find it hard to hold it still.[4d]

No one knows exactly how it does it, but the Shokk Attack Gun projects a narrow forcefield through the Warp, beginning at the end of the barrel and ending roughly where the gun is aimed. The portals look like small spinning black holes. In this way it is possible for living creatures to travel through the warp towards the exit point.[4d][3c]

Though the field maintains the integrity, an unprotected journey through the Warp is a very horrifying experience, and no Ork would agree to being fired, and Gretchin have the brains enough to avoid it, so Mek Operators of Shokk Attack Guns gather Snotlings, who are brainless enough to serve as its ammo. They are fired out of the gun, driven out of their tiny minds in the process. This has the effect of terrifying the Snotlings, making them exit the portal in a frenzy, ripping and tearing at anything they encounter as they leave the portal. This is effective because the Mek often tries to aim the gun directly on top of enemy soldiery, and they emerge inside living creatures or enemy tanks (ripping them apart from the inside) as well as landing nearby due to the very effective condensed exit point. Otherwise they are seen dropping out of the sky onto unsuspecting enemy troops.[4d][3c]

The device itself is very complex and it is fairly common for it to fail in different and spectacular ways. The gun is known to misfire causing the tunnel to implode, killing anything in transit at the time. It can explode, leaving a crackling orb of unreality in its place. Or it can spin out of control, its operator failing to control it efficiently, making Snotlings explode in a spray of blood and gore, open a hole into the Warp itself, as a ravening cloud of sentient daemonic ichor gushes out into the material realm, or result in any kind of unnatural and destructive phenomena. Overall, it must be the most unpredictable waeapon ever created and it is rightfully feared by Ork enemies.[3c]

The gun is maintained by a Big Mek and a Runtherd entices Snotlings into the barrel. Sometimes a group of Shokk Attack Gun-wielding Meks form a Shokk Attack Battery with the help of a Runtherd to ensure that a constant stream of Snotlings is herded towards the Meks. Such a battery wreaks untold havoc across a battlefield resulting in a myriad of unpredictable and devastating effects.[5] It can also be mounted on a Mekboy Junka.[6]