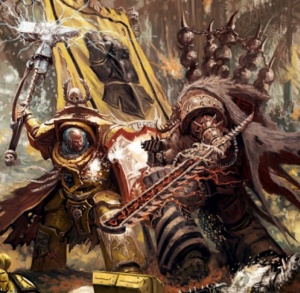 Shon'tu is an infamous Iron Warriors Warsmith and commander of the warband Sons of the Forge.[1]

Shon'tu was present during the Siege of Terra and like most within the Iron Warriors, has swore an eternal hatred for their rivals, the Imperial Fists.[2c] Once upon a time he faced with Lysander (a mere Space Marine Scout at that time). Out of mercy for an innocent, which was taken hostage by a Shon'tu, Lysander let him escape and long after regret of it.[3] Shon'tu was also responsible for the capture and vicious torture of Imperial Fists Captain Lysander on Malodrax.He later battled Lysander and the Imperial Fists yet again during the Invasion of Taladorn, where he escaped after being defeated.[2c]

Shon'tu later gathered a sizable force of Iron Warriors and other allies in preparation for a breakout of the Eye of Terror by attacking the nearby Imperial Fists Starforts of Bastion Inviolate and Endeavour of Will in 998.M41. The attack was led by his personal Grand Cruiser, the Ferrous Malice. Shon'tu consorted with many Daemonic powers to achieve his aims, binding the creature Velthinar to his will and making a pact with a band Tzeentch Daemons known as The Dancers, gaining the creatures services in exchange for a vial of the blood of Perturabo. Shon'tu hoped to ascend to Daemonhood by killing Imperial Fists Captain Lysander and offering his head to the Gods of Chaos. Besides consorting heavily with Daemons, Shon'tu has much contempt for his fellow Warsmiths and considers those in his Legion who do not work with the Ruinous Powers to be weak. But despite his preparations, in the end Shon'tu was narrowly defeated in the Battle for the Endeavour of Will, and escaped in a Dreadclaw to exact his revenge on Lysander on another day.[1]

Next, Shon'tu concoted his most audacious plan yet by capturing a Space Hulk full of Tyranids and sending it on a collision course with Terra. However due to the will of the ships captured Navigator, the hulk instead struck the world of Drashin. Shon'tu's plan was still not without its benefits, as in the ensuing battle Imperial Fists Chapter Master Vladimir Pugh was killed. In retaliation, nearly the entire Imperial Fists chapter tracked down Shon'tu to his old base of Malodrax, where he had since activated the ancient space station Tamunash. In the ensuing Fall of Malodrax, Shon'tu was again defeated by a Space Marine coalition.[2a]

After the battle, Shon'tu was thought dead. However in 975.M41 Imperial Fists Veteran Sergeant Tynon is discovered dead on the world of Endrion while training Cadians. The words Shon'tu lives are carved into his chest. Later Lysander tracks remnants of the Sons of the Forge to the Torricas System. However they find only 1 dead Chaos Marine there, an Iron Warrior who the Imperium thought had taken command of the warband following Shon'tu's death. He is found disemboweled and chained with the word Shon'tu Lives smeared in blood next to his corpse.[2b]

Shon'tu returned to exact his vengeance on the Imperial Fists in 999.M41. Allying with the Daemon Be'lakor, Shon'tu plans to hijack the Phalanx and use it to bombard Terra's Imperial Palace. Taking the Imperial Fists by surprise, he finds only the battered 3rd Company (later joined by the Legion of the Damned) defending the vessel. Ultimately the duos plot was foiled thanks to the intervention of the Legion of the Damned and the Warsmith was killed by the First Company squadron of Terminator Sergeant Furan.[4]