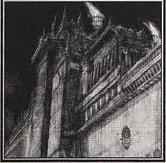 Image of the Shrine World

Shrine Worlds (or Shrineworlds)[8] are Imperial worlds devoted to a Saint of the Imperium and are often named in their honour. These worlds are ruled directly by the Adeptus Ministorum and attract huge amounts of pilgrims from all over the Imperium. There are also the dark mirrors to these places of Imperial devotion - fallen worlds where the inhabitants offer up ceaseless prayer to the Dark Gods. These places of obscene sacrifices and bloody rites are not suffered continued existence for long.[2] Often Shrine Worlds are places of eternal rest for holy men and women of the Imperium and the entire surface of these sacred planets are given over to the hallowed crypts of sainted and great monolithic cathedra.[4]

Most shrine worlds usually fall into another category - for example, Hagia is an agri world while Herodor is a Hive World. They have a strong relationship with the saint in question, such as being the world of his or her birth or martyrdom.[Needs Citation]