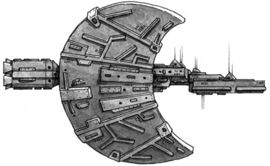 The Shroud Class Cruiser is equipped with a heavy compliment of Lightning Arc Turrets.[2] They were first recorded in 992.M41 during a battle with Battlefleet Pacificus. In the following six years three more incidents ended with the Shroud-class Light Cruisers retreating from battle. It is believed that the ship class or crew were under evaluation.

In 998.M41, five Shroud-class Light Cruisers assaulted the Adeptus Mechanicus facility on Mars. Several managed to land on the soil of Mars itself and although they were all destroyed in the end, their hulks were never found. Since the Mars incident, six additional encounters have seen the Shroud acting as the forward eyes and ears of the Necron fleet. They excel in this role because no ship that is capable of catching them has the firepower to engage it. The fact that five of these light ships easily infiltrated the Mechanicus's homeworld, reinforces the danger the Necrons pose to the Imperium.