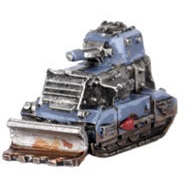 The Siegfried is an Imperial Guard light tank first developed during the civil war on Krieg.

The Siegfried was seen as a replacement for the Sentinel, whose locomotive system was too complex and armouring too light for the dangerous conditions on Krieg at the time. Derived from the famous Land Crawler agricultural vehicle, it was armed with a Multi-Laser and replaced the Land Crawler's simple yet sturdy catalytic engine for a more powerful gas turbine one which, despite being fit with considerably more armour, doubled the Siegfried's top speed.[1]

With the end of the Civil War the Death Korps returned to using Sentinels in their regiments, although the light tank is still produced in the huge underground factory complexes of Krieg and utilized in large numbers by other Siege Regiments. The Baran Siegemasters in particular use the Siegfried as a mobile reserve and breakthrough tank.[1]