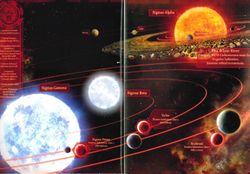 The Signus Cluster is a trinary star system of the Galaxy. It is located in the Northern Cross, on the Eastern Fringe.[1a]

At the onset of the Horus Heresy, Horus sent a messenger aboard the Word Bearers vessel Dark Page to a mustering of the Blood Angels Legion, informing Sanguinius that the worlds of the Signus Cluster had gone dark due to the reemergence of a xenos race called the Nephilim, thought to have been destroyed by the Blood Angels, Luna Wolves and White Scars legions during the Great Crusade.[1a]

Horus called for the Blood Angels to respond in force, and Sanguinius agreed, mustering the bulk of the legion along with the Word Bearers on the Dark Page and a surprise contingent of Space Wolves[1b] that had joined the fleet on the command of Malcador the Sigillite.[1c] In reality, however, the message was a trap. Secretly the Signus Cluster was the focus of a Daemonic snare designed to corrupt the Blood Angels and cause them to fall to Chaos.

In the system itself, there had been an outbreak of unexplained phenomena over the course of several months. The worlds of the system were suffering from a massive increase in birth defects, inexplicable meteorological patterns and the mysterious deaths of the Astropaths assigned to the colonies of the cluster. The colonists called for help, appealing to the Administratum, Imperial Army and even the Legiones Astartes for aid. Eventually, help appeared to arrive in the form of a man named Bruja, an emissary of Horus (whose treachery was still unknown by this point).[1b]

When the Blood Angels fleet arrived, they found no sign of the Nephilim and that the system had been almost completely scoured of life. They soon found themselves trapped in the system, cut off from Astropathic communications by a black veil that had formed around the system which even obscured the light of the stars outside.[1d][1e]

As they advanced on the Capital World, the Blood Angels found themselves beset by more strange events. Eventually this culminated in the Battle of Signus Prime.

There were three suns in the system, and originally there were seven planets and fifteen moons along with other, smaller bodies, like asteroids.[1d] However, some of these were destroyed either before the Blood Angels fleet arrived in system, or during the events afterwards.