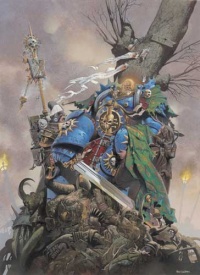 Inquisitor Silas Hand was born on the planet Isis IX in the Polaris sub-sector.[2] Due to his frequent travels through the warp while executing the duties of an Inquisitor, Silas's exact birth date cannot be confirmed.[1a]

Silas Hand caught the attention of Inquisitor Lord Enoch during the purging of the Schola Progenium facility where Silas was raised. Enoch found in him a successor that could continue Enoch's legacy and was taken in to his retinue as an interrogator. Hand gained new skills rapidly while working for Enoch and steadily rose in the ranks of the Inquisition.[2]

As a Daemonhunter, Silas Hand came to know things no sane man would willingly seek, and served the Imperium with a zealous drive that made him stand out amongst the ranks of the most holy Inquisition. Unfortunately for Hand, accusations of taint followed him closely, and whispers lingered that he delved too deep into the powers of Chaos. Furthermore, it was revealed that there were three instances of contact with a Warp entity known as Grimspyre. In each case, the Inquisitor was bested by this entity but eventually survived these encounters, suggesting the possibility of having his life deliberately spared as part of some devious plan on the part of the entity.[1a]

The last mission of Inquisitor Hand was the investigation of Sister Ephrael Stern, who was reported as being tainted by Chaos within the Convent Sanctorum. Hand was seen with his retinue heading out for Ophelia VII where Sister Stern was residing. He found no signs of taint in Sister Stern and the investigation subsequently took him to Parnis, the planet Sister Stern came from before being suspected of being tainted by Chaos. Hand is suspected of uncovering the true allegiance of a highly-placed member of the Navis Nobilite during the voyage to Parnis aboard the Hammer of Thor, a Lunar class cruiser owned by the Ecclesiarchy. There is, however, no hard evidence of what occurred during this voyage. It is believed that a creature of Chaos possessed the vessel's Navigator and brought about the destruction of the entire ship when it was detected. Inquisitor Hand and a number of Sororitas accompanying him are known to have escaped the destruction of the Hammer of Thor, touching down on the surface and continuing the investigation. Whatever occurred there is speculation but it is known that Inquisitor Hand and his retinue perished on the planet at the hand of some Warp entity, presumably the Keeper of Secrets.[1a]