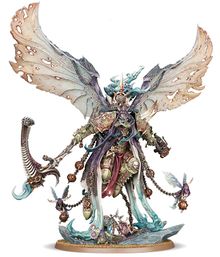 Silence was a massive two-handed battle scythe, which was the personal weapon of the Primarch Mortarion.[1]

It was noted as being one of the most fearsome blades wielded by any of the Primarchs - though there were dark whispers that the weapon had a Xeno-tainted origin. Some familiar with the legend of the Death Guard Primarch's early life, believe that Silence was once the weapon of the terrible creature that named himself Mortarion's Father.[1]

It is not just raw power that makes Silence such a fearsome weapon. A Daemon dwells within the censer that tops its haft. This entity’s fell power renders the slightest nick from the blade lethally poisonous. It also infests the leprous smog that billows in trails behind each swing of the scythe, rendering it anathema. Metal rusts and flesh rots at its mere touch, reducing the enemy to putrid ruin in moments.[3]

Millennia later, during the Thirteenth Black Crusade, Mortarion still used Silence as his personal weapon while he invaded Ultramar in the Plague Wars. Despite being constantly surrounded by the filth of Nurgle's followers, the weapon always remains surprisingly clean and is still as sharp as ever.[2]