Victory does not always rest with the big guns, but if we rest in front of them we shall be lost.

The Silver Skulls are listed as an Ultramarines Successor Chapter.[24] However their gene-seed records are "inconclusive" and under investigation by the Ordo Hereticus.[30a][30b]

The Silver Skulls were created during the Second Founding, in the days following the Horus Heresy. Originally the Silver Skull's homeworld was known as Lyria. Sometime in M33 the world was rendered a Dead World when the Silver Skulls enacted the sanction of Exterminatus upon it, to prevent it from falling under the control of the forces of Nurgle.[31]

Since then, the chapter's homeworld has been the planet of Varsavia in the Ultima Segmentum, on the boarder of the Segmentum Obscurus and near the Gildar Rift, and now in the area known as Imperium Nihilus. Here the Silver Skulls are surrounded by numerous Xenos species, recently fighting costly yet significant battles against the Dark Eldar and Necrons.[15]

The Silver Skulls also patrol the nearby Gildar Rift, accepting the challenges of maintaining peace in the sector, despite it being a plain and inglorious duty.[32a]

After the opening of the Great Rift, the Silver Skulls have been amongst the most active of all Chapters fighting against the forces of Chaos and are now fighting on many fronts across.[24] They have been named as one of the 10 Shield Chapters of Ultramar.[36] 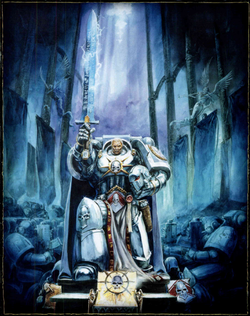 The Silver Skulls are recruited from the fierce tribesmen of Varsavia and this culture has bled into the Chapter. They bury their warriors upon Varsavia's moon of Pax Argentius, believing that the spirits of their ancestors watch over them. The ashes of the fallen are placed in urns and put on display after prayer rituals. The honored dead include not just warriors but also Chapter Serfs.[14c] The Chapter homeworld's culture has also given them a fearful reputation as headhunters.[28] As part of its post-battle rituals, the Chapter selects the heads of the most powerful enemies, flense flesh from bone and layer the skulls in a coat of silver to be displayed within the Fortress-Monastery.[13][15] The Silver Skulls also tattoo the skin of their entire bodies in honour markings, with the face being the last area to be marked; the right to do so earned in battle.[13]

Presumably, the chapter did not have these cultural influences when their homeworld was the planet of Lyria.[31]

The current Chapter Master of the Silver Skulls always bears the name of Argentius upon assuming command. Currently, they are on their 27th bearer of the name.[13] Likewise, their Chief Prognosticator bears the name of Vashiro, meaning "The One Who Sees". The current "Vashiro" has held the name for over 500 years.[19]

The Silver Skulls organize themselves primarily along the lines written in the Codex Astartes, however the 9th Company has been altered from a reserve Devastator Company into a designated "Siege" company, with the 9th Company's captain holding the title of "Siege Captain".[30c]

The Silver Skulls paint their company signifier as a number on their knee pad, while their squad number is paints upon their backpack. They also paint their role signifier on their right pauldron (with the signified painted in the company's colour), while they place their chapter emblem on their left pauldron.

The Silver Skulls primarily hold to the tenants and tactics of the Codex Astartes, however they further specialize in siege warfare. In battle, the chapter is known for being relentless, efficient, and extremely pragmatic, not adverse to using whatever tactics it takes to win. When engaged in melee combat, they are known for their barbaric brutality[19][21][31]

Their most notable aspect is the use of Prognosticators, the Silver Skulls Librarians and partial spiritual advisor alongside their Chaplains.[13][15] These warriors are the seers of the Chapter, reading the Emperor's Tarot or Rune-stones for divination of the future, granting the squads and companies they are attached to an edge for the coming battle.[13][15] The Chapter takes the readings seriously, as such that on some occasions, the Prognosticators have counselled against the Chapter becoming embroiled in a particular war, however this can prove problematic as the honour of the chapter at times demands that they take part in a battle they know will end in defeat. Despite this somewhat fickle nature, the Chapter is known to fight with honour the length and breadth of the Imperium.[15]

The Silver Skulls claim[8] and are believed to be descendants of the Ultramarines Chapter, however, with the passage of time this remains unconfirmed, although they behave as a Codex Chapter[15] and fight alongside the Primogenitor Chapters as if they were their own kin[15]. During the Thirteenth Black Crusade, the Primarch Guilliman returned to the Imperium and the Chapter was recognized as one of the Scions of Guilliman.[24]

The Silver Skulls' geneseed has also been under the investigation by the Ordo Hereticus. For unknown reasons, the chapter's geneseed records were so heavily classified that Inquisitor Liandra Callis struggled to obtain them, despite visiting the genevaults of Terra itself. However, the inquisitor eventually completed her investigation. While the chapter was shown to be free of taint or mutation, when the results of the investigation were presented to the Silver Skulls leadership, it was feared that their origins could cause a schism within the chapter were the rest of the SIlver Skulls to learn of it.[30d]