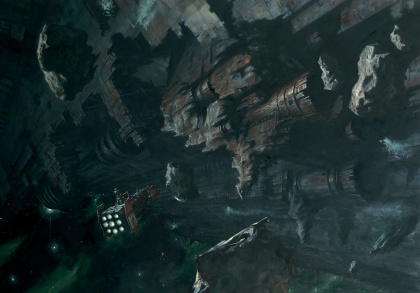 The Sin of Damnation is a space hulk that was assaulted by the terminators of the Blood Angels' First Company, led by Captain Michaelus Raphael in 589.M41.[1]

Six hundred years before the arrival of the Sin of Damnation, the entire Blood Angels Chapter was decimated during a failed assault on another space hulk in the Secoris system, leaving only fifty Marines in the whole Chapter. Six centuries later, the Sin of Damnation, was spotted by Rogue Trader Borrak Vorra near the Blood Angels' fortress monastery on Baal. Spurred on by their shame from the disaster in Secoris, the Blood Angels dispatched their First Company, under the command of Captain Raphael. The Space Marine force, consisting of over eighty Veterans in Terminator Armour, managed to not only cleanse the hulk of thousands of genestealers[1] (approximately forty thousand genestealers)[2], but also recovered an ancient Blood Angels' artefact in the process.[1]

The Sin of Damnation appeared in the 1993 Space Hulk game, although it was assaulted by Dark Angels instead of Blood Angels. The hulk also consisted of a genestealer cult, as a Patriarch is present.