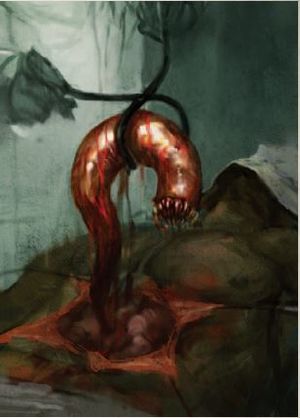 A small, aggressive beast with a voracious and insatiable appetite, the Sinophian Boreworm is as dangerous as it is unnerving to look at.[1a]

Normally scarcely longer than the human hand length of pallid bristly segments, Boreworms have such semitransparent flesh as to render their internal organs visible in faint light. The head of the animal is marked by a circle of hooks, designed to dig into exposed flesh, while the gullet is lined with rings of teeth. Able to feed on virtually any source of flesh, the Boreworm uses these teeth to literally chew its way inside of a corpse or living creature. As it feeds, the worm becomes flush with blood, and more than one brave man has felt a rush of horror at seeing the scarlet length of a Boreworm, slick with blood and slime, emerge from a body, its hooked anterior questing about for more.[1a]

In the wild, Boreworms prefer long–dead corpses, devouring flesh too rotten for larger scavengers. They’ll also attach themselves to anything desperate enough to grub amid the remains, eating the luckless animal from the inside out. Those few human victims who have survived a Boreworm’s attack state they can feel every twist and turn the Boreworm makes inside their bodies. Only a precious few can deal with the sensation and seek help—most commit suicide, indirectly serving the worm’s desire for a meal. If caught early, Boreworm infection can be cured with a combination of surgery and chemical treatments. However, once the worm starts to break up, death is almost certain.[1a]

Once inside a victim, a boreworm starts to break apart, each segment becoming a new boreworm. Roughly once every hour after entering the victim’s body, the boreworm loses a segment, which starts eating on its own after five minutes. Victims are almost always already dead by the time the new boreworms are large enough to begin to split into segments themselves.[1a]

Ordo Malleus Inquisitor Felroth Gelt and his retinue came across a boreworm on the hive world of Malfi. He discovered that this worm is used by Chaos cultists of the Blood God as it is considered sacred to them. The worm is used as a means of torture within the slaughter chambers of the cults; such services are employed by minor noble houses of Hive Cero to eradicate their undesirables and political rivals. Inquisitor Felroth Gelt and his cadre followed the cultists deep into the hive and killed them all, but not before swiftly eliminating the poor prisoners that were thrown at them staggering and moaning from the effect of the Khorne's Kiss (a euphemism for boreworm infection).[1b]