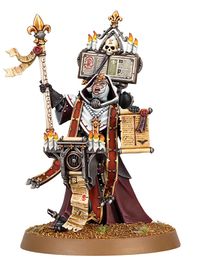 Sister of the Orders Dialogus[3]

The Orders Dialogous[1] (sometimes spelled Dialogus[3]) are a non-militant order of the Adepta Sororitas. The sisters within are experts in language and scholarly activities. They can translate texts, heretical, pious or alien in nature.[1]

Revered within the Ministorum as some of the most learned people in the Ecclesiarchy, the Sisters Dialogous generally keep to themselves. Inquisitors heading into places that speak new or unusual dialects often seek them out for their skills in unlocking ciphers and translating languages. They are considered invaluable in their ability to translate enemy communiques, often working with the Inquisition in these tasks. During battle, they will serve as conduits through which the Canonesses of the Orders Militant intone commands and prayers of defiance. Large contingents of Dialogous remain on a world after the enemy has been purged, assisting the Ecclesiarchy as they scour the planet for traces of heresy.[5] They often translate ancient scriptures which contain accounts of the Emperor into High Gothic.[5]

Though they specialize in languages and processing information, Sisters Dialogous are just as martially trained and fanatically devoted to the Imperial Creed as any Battle Sister. Sisters Dialogous generally leave their libraries only when their linguistic or cipher-breaking skills are needed. There have been occasions where a full Mission is sent to retrieve data, though this is rare because the risk involved in letting sisters with access to sacred and secret information out into the open is very high. This has led the Dialogous to be much more cloistered and in some ways naive.[4b] The highest ranking of the Order maintain the ancient texts of the Vault of Origins.[5]

The Orders Dialogous of the Convent Sanctorum

The Orders Dialogous of the Convent Prioris

A Sister of the Orders Dialogus