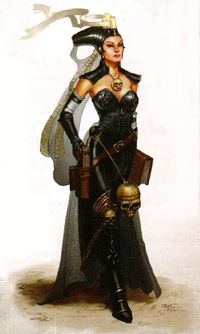 A Sister of the Orders Famulous[2]

The Orders Famulous are a non-militant wing of the Adepta Sororitas[1], and an individual of the Order is referred to as a Sister-Chatelain[5]. They provide diplomats, advisers and chamberlains who have an excellent knowledge of Imperial blood lines and act well when disputes form on worlds over ruler-ship. They are often employed by Thorian Inquisitors.[1]

The sisters of the Orders Famulous serve amongst the household of the highest of the Imperium’s nobility, acting as chamberlains, counselors and consuls. They broker inter-house alliances, trade deals, and marriages, and their hand is ever at work amongst the highest echelons of power. The Sisters of the Orders Famulous are skilled diplomats who perform many negotiations behind the scenes. Through their arranging of alliances and marriages, they take a direct hand in the fate of humanity, for those they counsel wield the power of whole planets and control the fates of billions. The servants of the Orders Famulous do not openly discuss this element of their work, even with other members of the Sisterhood, but many do appear to have extensive contact with members of the Inquisition, especially the Ordo Hereticus. Much of the work of the Orders Famulous also involves tracking the manifestation of saints, and they often become involved in the arcane process of determining whether or not.[3]

The Orders Famulous also provide the Ecclesiarchy with watchful eyes throughout the Imperium, often serving as their spies who closely observe the dealings of influential individuals. Should these people go against the dictates of the Adeptus Ministorum, they may send reports that result in Confessors being sent to extract admissions of heresy. Powerful families that have held sway for generations may be eradicated entirely at the word of a Famulous Sister. In the course of their duties, Sisters Famulous often speak of how the Emperor manifests his will through his subjects, pointing to the miracles performed by Saints as evidence.[4]

The Orders Famulous of the Convent Sanctorum

The Orders Famulous of the Convent Prioris