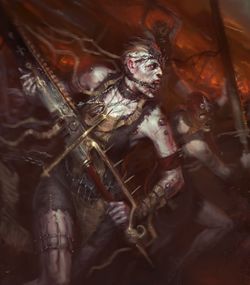 Sisters Repentia are fanatical self-mutilating warriors of the Sisters of Battle.

Having failed or fallen short of the Sororitas' strict religious codes in the past, Repentia Sisters seek to earn the Emperor's grace once more by self-flagellation and find a glorious death in the heat of battle. Though ultimately outcasts, they are none the less revered by their fellow Sisters, who see them as pilgrims seeking the absolution of death and ultimate sacrifice in the name of the Emperor. Repentia typically go to battle wielding massive Eviscerator Chainswords.[1]

Sororitas of any Order can become a Repentia. A Battle Sister who disobeys the command of her superior, a Dialogus who is given to the sin of curiosity, a Famulous who fails to unveil the hidden schemes of her wards - all are disgraces in the eyes of the Sisterhood. They are exited from whatever Order they serve and given over to one of the Orders Militant, where they undergo merciless spiritual and physical reconditioning. In war they are typically placed in the front of battle. It is possible for a Repentia to redeem herself through deeds of great bravery and butchery In fact, some of the greatest and most faithful Champions of the Adepta Sororitas were at one point Repentia, such as Celestine. Those redeemed in this way are revered by their fellow Sisters, for through them the Emperor is shown to shepherd his servants through their weakness. Some Sisters even go so far as to willingly become Repentia over the slightest shortcoming.[6] 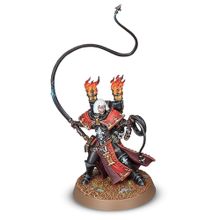 Repentia Superiors, also known as a Repentia Mistress[1], are given the solemn task of guiding Repentia in their atonement. These veteran Sisters act as overseers of the Repentia, driving them forward in battle and watching for any signs of sin. Repentia Superior's will frequently remind the guilty of their sins, recounting with scorn their failings so that their self-loathing and humility remains strong. Repentia Superiors carry Neural Whips which send jolts of agony through a targets body. Before battle, each Repentia takes a lash of one of these whips, filling their bodies with pain. The agony she endures reminds her of her guilt, causing her to throw herself at her enemies in the coming struggle. On the battlefield, Repentia Superiors lead from the front and use their whips to strike down the enemy.[6]

Oath of the Penitent

The ritual of casting aside ones status as Battle Sister is undertaken with her squad members in attendance and in the presence of a superior officer. The ritual is as follows[2]:

Penitent
I am far from absolution. Lost to any exculpation. I offer myself to repentance. Before the Emperor I have sinned. Beyond forgiveness. Beyond forbearance. Beyond mercy.

The Squad members take the Penitent's wargear and cast it aside. They use the remnants of robes to roughly clothe the Penitent.

Squad
We turn our backs upon you. We cast off your armour and your arms.
Penitent
I leave this company of my own free will and by my will shall I return. I shall seek the Emperor's forgiveness in the darkest places of the night.

The Penitent's hair is roughly shorn with a knife.

Squad
When forgiveness is yours, we shall welcome you back. Until such time you are nameless to us.

Penitent
See me and do not see me. Know me and know fear, for I have no face today but this one. I stand before you a Sister Repentia, until absolution finds me once more.

Officer
So shall it be.