The Sisters of Silence, also known as the Anathema Psykana[13] or Silent Sisterhood, are an ancient, anti-psychic militant order. They are the militant arm of the Adeptus Astra Telepathica and are internally referred to as the organization's Departmento Investigates.[12] However their affiliation with this body is largely symbolic, and in truth they are an autonomous military force answering directly to the Emperor and the Lord Commander of the Imperium.[16] Together with the Adeptus Custodes they represented the Talons of the Emperor being the left hand of the Emperor.[14] Fragmenting after the Horus Heresy, they were brought back under Imperial control by Roboute Guilliman in M42.[12] Its ranks consist entirely of Blanks. 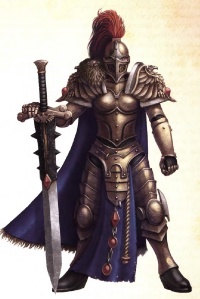 A Vigilator of the Silent Sisterhood

The Sisters of Silence have a long history, originally operating from the Somnus Citadel on Luna. They are an all female order, in much the same way as the Adepta Sororitas; the major difference is that the Sisters are all Blanks. Recruited from Untouchable stock[3a], the Sisters are anathema to psykers. Their very presence disrupts psychic activity and they are presumed to have been immune to most forms of psychic assault. The main purpose of the Sisters of Silence is therefore to seek out and apprehend psykers. As warrior-investigators they were involved in all aspects of the capture and transportation of psychic individuals[1] and still are found among the crew of the Black Ships.[12]

While nominally part of the Adeptus Astra Telepathica, in truth the Sisters of Silence answer directly to the Emperor. This allows them to operate on worlds usually immune to the Imperial Tithe, such as those belonging to the Ecclesiarchy or Adeptus Mechanicus. They also are known to be deployed against large covens of Rogue Psykers or Chaos Space Marine Sorcerers.[16]

The Sisters of Silence's origins are shrouded in mystery. However it is said that they first appeared during the early Great Crusade when the Primaris Psykers of the Astra Telepathica proved unable to properly control captured Psykers. A better solution was needed, and from this conundrum was born the Silent Sisterhood. An incident known as the Cataclysm of Pentacanaes may be tied to their formation. Others say that the origins of the Silent Sisterhood go back further to a lost agency of the Dark Age of Technology.[10b]

During the years of the Great Crusade, a cadre of Sisters were dispatched by the Emperor to aid the Death Guard in an attack on a Jorgall cylinder ship. Once there, they managed to wound a Jorgall mutant Psyker and capture it for transport to Terra.[2]

The major base of operations for the Sisterhood was the Somnus Citadel on Luna, which was maintained by the ancient Selenite Cults.[2][10b] The Sisterhood, while nominally under the control of the Astra Telepathica, quickly became a personal force associated with the Emperor himself. Along with the Custodes the Sisters of Silence were the only military force of the Imperium permitted to walk freely within the inner Imperial Palace, the sovereign domain of the Emperor.[10b]

The Sisters of Silence participated in some of the major actions of the Horus Heresy, including the defense of the Imperial Palace. They were perhaps most successful during the assault on Prospero, where a force of Sisters were deployed to provide specialised support for the attacking Space Wolves Legion. Due to their Untouchable nature, the Sisters were proof against the psychic attacks of the defending Thousand Sons Legion and provided a stable bulwark for the assault to be anchored upon. The Sisters of Silence were also vital in preventing Terra from being overrun by Daemons during the War Within the Webway.[1] The Sisters of Silence took part in the final defense of Terra, with Sister Commander Jenetia Krole falling to Kharn of the World Eaters.[18a] 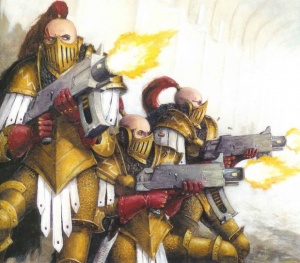 After the Warmaster’s rebellion was halted at Terra and the Emperor was interred upon his Golden Throne, the Sisters of Silence found themselves without direction. Many were slain or lost forever, scattered and stranded across a war-ravaged galaxy. Undaunted by the sudden lack of guidance, they went abroad into the wider Imperium to continue their work. There amongst the stars they hunted savants and witches with unstinting fervour; some as part of the Adeptus Astra Telepathica, some as lone but loyal agents who eventually settled within the teeming hordes of Humanity. In some rare cases, these hunters learned to suppress their uncanny auras to some degree, and in living alongside others begot their own bloodlines. None of these would-be settlers ever stayed in one place for long, for the Pariah gene is not named idly. Wherever the Sisters of Silence sought out new lives, they were hounded into exile once more by those that hated them for their intrinsic otherness. Still, not all were reviled or burned as witches. The offspring of these few had children of their own, and over the generations, the genetic peculiarity of the Silent Sisterhood found its way further into the vast spread of the human race.[Needs Citation] The exception was the Chamber Astra, which operated the Black Ships and continued to operate uninterrupted.[26] Many believed the Sisters to have disbanded or gone extinct, though this was never the case.[16]

The Sisters of Silence have banded together but rarely since their devolution at the end of the Horus Heresy. Due perhaps to the uneasy nature caused by being in the presence Blanks, they were cast out of the Adeptus Terra sometime after the Heresy.[13] By M32, only a single force of fifty Sisters were known by Imperial authorities, dwelling on the world of Nadiries. These stated that the Imperium had discarded them out of mistrust following the Heresy. Despite being fiercely loyal to the Emperor and Primarchs, this last bastion of the Sisterhood expressed disdain for the modern Imperium, stating they would rather see it burn than be of aid. Nonetheless, Lord Commander of the Imperium Koorland was able to convince them to help against the Orks during the War of the Beast.[7] By the 41st Millennium the remaining Sisters were largely forgotten by the Imperium, their sparse and virtually unfunded Chambers operating from several Black Ships. They continued to serve in their role, but without recognition or resupply. Sister Atarine Hestia was vital in keeping the dying Sisterhood together.[13] Some Sisters remained behind on the Somnus Citadel, forming the Fellowship[17].

The situation for the Sisterhood changed dramatically with the rebirth of Roboute Guilliman.[16] At the end of the 41st Millennium a surviving group of Sisters of Silence appeared on Luna during the last stage of the Terran Crusade. These Sisters were from their few remaining strongholds across the galaxy, called back to Terra due to the Thirteenth Black Crusade at the behest of the desperate High Lords.[13] In truth however, they had been secretly gathered perhaps years in advance by Captain-General of the Adeptus Custodes Trajann Valoris, who foresaw trouble.[13a] Alongside Custodes from Terra these Sisters proved vital in the defeat of Magnus in the battle.[11] After the return of Roboute Guilliman, he issued the Dispensatus Anathema, declaring that the remaining strongholds of the Sisters of Silence be gathered and expanded. He sent many emissaries across the galaxy, discovering lost Sisters strongholds and issuing his summons to Terra. He went on to re-garrison the Somnus Citadel on Luna.[17] When the great muster at Terra was complete, 3,000 Sisters had assembled and were deployed as the Vigil Indomitus, taking part in Guilliman's new Indomitus Crusade. Since the Dispensatus Anathema the Sisterhood has been greatly expanded and new Vigils once thought lost have been rediscovered by Crusade forces.[16] the Sisters have returned to the frontlines, forming Orders and Vigils in every Segmentum and often operating in fleet-based forces for the Indomitus Crusade.[12]

The new Sisters of Silence fleets have used their null abilities in conjunction with the Navis Nobilite to penetrate the new fierce Warp Storms that ravaged the Imperium.[12]

Each Sister swears an oath of silence known as the Oath of Tranquility upon being nominated for Sisterhood; before this, when they are novices, they are allowed to converse normally. The oath of silence prevents them from speaking the terrible knowledge they learn to hunt their prey, while also ensuring they never speak clemency for their foes.[25] Amongst their other duties novices sometimes act as interpreters between senior Sisters and other agents of the Imperium. Full Sisters converse in their own sign-language, but there is at least one example of them being conversant in other forms of sign-communication, such as Astartes battle-signage[2], voidsys, and graph-binarc.[25]

On occasions that a senior Sister needs to communicate in a complex manner to those outside their Order, they will use a Proloquor, an acolyte who has yet to take the vow of tranquility.[16]

At the time of the Great Crusade and Horus Heresy the Sisterhood was overseen by three general officers: the Sister Commander, the Mistress of the Black Fleet, and the Nemesis Praxia. Below these were Three distinct groups. The first was the Chamber of Oblivion which operated battlefield units led by Oblivion Knights and Knights-centura. The second was the Chamber of Judgement which fielded the dreaded silent judges of the Excruciatus.[10b] The third was the Chamber Astra, which captained and guarded the Black Ships. Unlike the rest of the Silent Sisterhood, the Chamber Astra never was scattered or abandoned after the Heresy.[26]

The organization of the Sisters involved the splitting of its members into numerous cadres such as the Storm Blades each of which contained a different armour schemes. The largest primary operating unit of the Sisterhood is a Vigil, which contained approximately 1,000 sisters. The exact size of the Sisterhood at the end of Great Crusade is not known, though it numbered in the tens of thousands.[10b] Currently the Vigil Indomitus, the largest Vigil of the modern Sisterhood, consists of over 3,000 warriors.[16]

While each Vigil varies in identity, traditions, and history, they are all divided into a number of Cadres, and each cadre is given a unique designation before taking up the Vigil's historic hues. The Cadres are company level-bodies, though it is rare for them to ever fight as one. Instead they undertake specific duties, such as investigating non-compliance with the Great Tithe, hunting down rogue psykers, or cleansing a region of psykers.[16] 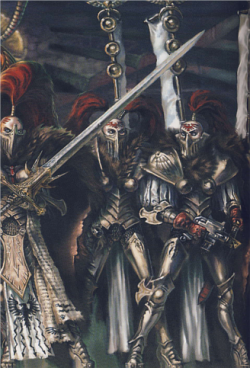 The Sisterhood recruits Blanks from a great many sources, which vary from Vigil to Vigil. Some have ended up among the Imperial Tithe, their worlds eager to be rid of the pariahs. Others are handed over by the Inquisition or Rogue Traders. Rumors persist that the Sisterhood themselves maintain genetically stable bloodlines of Pariahs, breeding new Sisters for recruitment.[16]

Once recruited, aspiring Sisters known as Proloquor's begin grueling training and a range lesser duties. Only once they have proven themselves worthy of the Sisterhood's high standards are they inducted fully. Upon becoming a full member they take the Vow of Tranquility, never speaking again.

Clad in their iconic Vratine Armour, Sisters of Silence operated a variety of weaponry based around their mission of Psyker-hunting. Their primary close ranged weapon was the Executioner Greatblade or Power Axe[1a] while others carried Bolters and Flamers. They also frequently utilized Psyk-out Grenades.[8] For transportation and fast attack, the Sisters of Silence were known to ride into battle on Grav-Rhinos, Kharon Pattern Acquisitors, Dividers, and Jetbikes.[1]

In the Age of the Dark Imperium, much of the advanced weaponry and technology wielded by the Silent Sisterhood has since been lost. This includes psi-negation and disruption technology as well as anti-gravity vessels said to be fashioned by the Emperor himself. It is one of the primary goals of current Sister-Commander Asurma to reclaim this lost technology.[25]