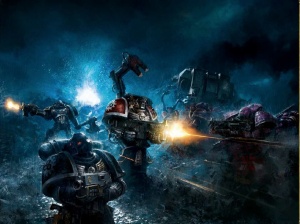 The Iron Hands are ambushed by Emperor's Children

The Skarvus Ambush was a battle fought by the Iron Hands in 929.M40 and is considered one of the Chapter's worst ever defeats.[1]

After a string of brutal battles in the Myrmidia system against the Orks of Waaagh! Skullsmasha, Clan Raukaan received a distress call from the Mars class freighter Endymion, deep in the neighbouring Corladian Gulf. This cry for help reported an attack by the Emperor’s Children supposedly fighting in the name of the Daemon known as the Sapphire King. Iron Captain Maklon and Techmarine Daarmos were quick to respond, leaving a token force to keep watch for the Orks and taking a complement of more than half of Clan Raukaan’s battle-brothers in search of the Traitors.[1]

The Iron Hands strike force reached the last known coordinates of the Endymion to find the craft gone. However, localised scans quickly revealed a tangle of Warp signatures leading to the nearby death world of Skarvus. Led by Maklon and Daarmos, the warriors landed amid Skarvus’ jagged bone-jungles. Thunderhawks landed a sizeable armoured strike force which followed the Warp signature to its source. Even as the vast carcass of the Endymion, the traitors struck, opening fire with Sonic weapons. Clan Raukaan fought back hard, yet the Emperor’s Children outnumbered the Iron Hands several times over, and their well-executed ambush had lent them the element of surprise. Gradually the tanks and warriors of Clan Raukaan were torn apart by lethal sonic bombardments. Only a fraction of Maklon and Daarmos’ forces escaped the ambush on Skarvus alive.[1]

Both of Raukaan’s long-serving Iron Fathers had been lost in the disastrous battle, refusing to order the retreat even though they faced impossible odds. Worse still, while the Iron Hands’ attention had been drawn away by the servants of the Sapphire King, the Orks had returned to Myrmidia in even greater numbers. The ensuing carnage was a blow to the reputation of the Iron Hands as a whole, for a Chapter whose brethren chose to abandon their posts in order to chase old vendettas must be carefully watched. Clan Raukaan, their numbers much reduced and their battle-brothers facing the strictest censure, were placed under the command of the conservative Iron Father Kristos, a Techmarine of the old guard. As the 41st Millennium dawned, Clan Company Raukaan was far from their Chapter’s favour.[1]