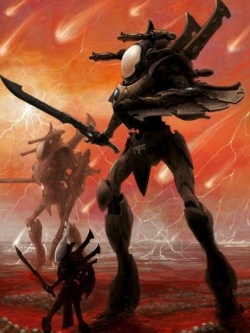 While gigantic and heavily armed with a mixture of mighty Heavy Wraithcannons, Suncannons, Ghostglaives, Scattershields, and other heavy weapons, the Wraithknight's advanced design still allows it to be nimble enough to run through the ruin of a scattered city. The shell of a Wraithknight houses the spirits of the dead much in the same way as the Wraithlord and Wraithguard. However, Wraithknights differ from their lesser cousins as they also hold a living Eldar pilot within.[1]

These pilots are rare and unusual warriors who were each born a twin. The psychic link between an Eldar and his twin is like no other, and this bond allows them to sense the proximity, mood, and even thoughts of their counterpart. If the twin were to die, the surviving brother or sister will often fade away in sympathy. Sometimes, when such a division takes place, the surviving twin will sacrifice what is left of his life to pilot a Wraithknight. The essence of the dead twin is transferred into a Spirit Stone attached to the machine, whilst the surviving sibling is put into a near-permanent trance within his cockpit. The clarity of thought provided by the living twin ensures that the construct moves with the speed typical of a living Eldar, while the psychic link of the departed sibling allows him to commune with the animating forces of his twin, but also spirits of former pilots of the construct. The great measure of control afforded by this mind gives the pilot mastery over the Wraithknights psychically-powered weapons systems and an acrobatic grace that seemingly defies its size.[1]

Wraithknights are often deployed on Crone Worlds at the forefront of quests for new Spirit Stones, which often involve dangerous encounters with Daemons and other nightmarish denizens. However as the End Times approach for the Eldar and their race dies faster then it can give birth, fewer and fewer twins are born upon each Craftworld. Many Wraithknight pilots are recruited from Revenant Titan helmsmen who have lost their twin in battle and driven to regain their kinship whatever the cost, give themselves over to the life of a Wraithknight pilot. Even more unsettling is that it is rumored that some Craftworld councils have removed the option of choice for such individuals.[1]