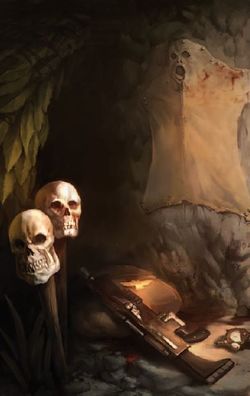 a pict of a claimed victim of the beast.[1a]

The Skin Taker, a strange being native to the feral world of Fedrid, is known only by its distinctive habit killing men for their skin. Long rumored to exist by those familiar with the beasts of Fedrid's thick forests, the Skin Taker has announced itself with a vengeance. slaughtering several hunting parties. The only remains are found strung up on frame flayed skins, a horrifying warning to any who might take the dangers of the forests lightly.[1a]

As an invisible creatures only speculations exist for the nature of such being, few people have survived a Skin Taker's assault, with fewer still able to describe one in action. Virtually all eyewitnesses state the same thing—an attacking Skin Taker is no more than a ripple in the air, a blur of motion with no discernible form. Some have said it appears as a “hole” in the air, a moving spot of visual distortion.[1a] An eye witness claimed that his friend saw a Skin Taker and using his own words: The jungle opened up and swallowed some fool.[1b]

These descriptions have led to several theories as to the true nature of the Skin Taker Some feel they are a form of tree–jumper, a mantid with unparalleled powers of concealment and camouflage. Others say its invisibility smacks of alien technologies and point to the Dark Eldar. And finally, there are hushed and whispered tales stating the Skin Taker is a Warp–born daemon, a creature of Chaos come to Fedrid to engage in unopposed slaughter.[1a]

Skin Takers seem to share the upper canopy with tree–jumpers, using the comparatively safer tree–tops to track a potential victim for kilometers before descending to make a kill.[1a]