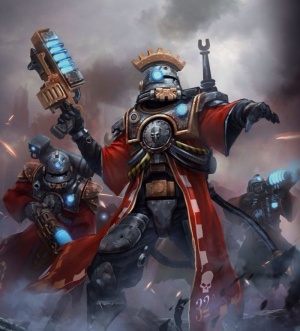 Skitarii Vanguards, known informally as Rad-Troopers, are a type of Skitarii infantry used by the Adeptus Mechanicus.

Skitarii Vanguards are so soaked in radiation from their Radium Carbine weaponry that even to approach them is to invite death. Eventually, the radiation burns through even their heavy armour plating, slowly poisoning them to death. Mindful of the harsh terrain of Mars, their legs have been removed from the knees down, replaced by cybernetic augmentation.[1] Their augmentations and radioactive conditioning has allowed Skitarii Vanguards to be deployed to the most hazardous war zones the galaxy has to offer.[3]

A Skitarii Vanguard squad is led by an Alpha, equipped with either a Phosphor Blast Pistol[2], Radium Pistol or Arc Pistol as well as a Power Sword, Taser Goad, or Arc Maul.[1]

Skitarii Vanguard led by an Alpha