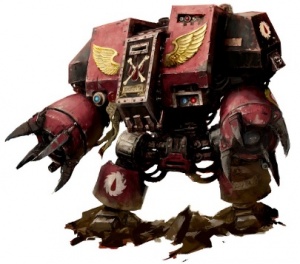 As a Space Marine, Skoraen had been part of the Bloodiron Charge at Vetix IV that broke the back of the World Eaters Bonescar warband, and personally held the line against the heretics of the Taunhaus Rebellion. These deeds, and the many that had come after, would be recorded upon the hull of his Dreadnought in icons and symbols, the meaning of many of which was known only to Skoraen himself. He later fought in the Cryptus Campaign.[1]