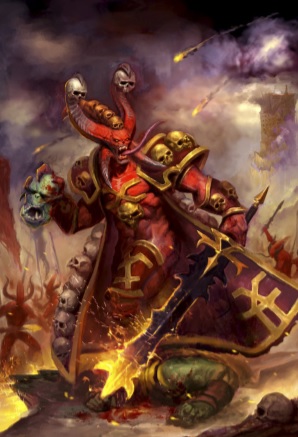 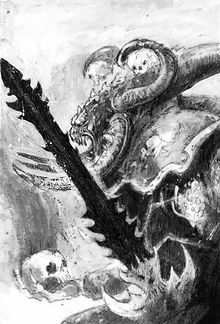 It is said that when Khorne created U'Zuhl, his first act was to chop the head from the first creature he met, another Bloodletter, thus beginning his existence of decapitation across the mortal and immortal universes. When U'Zuhl took his 888th skull, Khorne anointed him as his Sacred Executioner and he earned his title Skulltaker.[1]

In the middle of the greatest slaughter, Skulltaker always seeks out the mightiest of the enemy's warriors, hacking through the fray with his wickedly serrated blade so that he may confront his chosen opponent. Those that flee are cut down immediately, while those that stand and fight suffer a slower and much more painful death. Skulltaker is a duelist beyond compare, always dismembering and despoiling, but never slaying. Only when his foe is limbless upon the ground does Skulltaker allow him final release. He grasps their head in his hand, and offering the eight Words of Sacrifice, wreathes his victim's head in magical fire, burning away at their flesh until only bare skull remained. He then tears the skull free, holds it aloft for all to see, and places his prize in the great sack he carries on his back, along with all the trophies taken in that battle.[1]

When Skulltaker returns to the Brass Citadel, he presents his trophies to his master. Khorne takes most for himself and has them impaled upon brass spikes that adorn the ramparts of his keep. A few, particularly those that presented a real challenge, Khorne allows Skulltaker to keep. He weaves these into his cloak using bloody sinew to sit alongside his other great triumphs.[1]

Khul'tyran is the legendary Juggernaut mount of Skulltaker. Though Skulltaker prefers to fight alone, occasionally he will mount the beast. At the time the creature was claimed by Skulltaker from Khorne’s infernal foundries, Khul’tyran was said to have been the toughest in the Juggernaut stockade. The Daemon-beast had killed more of his kin than any other before or since. He prowled the perimeter of the pens, regularly making bids for freedom – he once shattered the compound’s wall and would have escaped were it not for the dozen Heralds of Khorne who held him back. Skulltaker selected Khul’tyran from the pack when the Champion witnessed the beast goring three Heralds at once. It was a sure sign, by Skulltaker’s reckoning, that they could take forth the Blood God’s wrath in an appropriate manner. And so they did. The pair has stormed out of the Warp to harvest a bounty of skulls for Khorne. They have dueled others on countless planets in the mortal realm, never yet losing a challenge. While Skulltaker decapitates his foes with the Slayer Sword, Khul’tyran tears into metal armour as if it were soft flesh, and flesh as if it were dust. So pleased is Khorne with their murderous work, that while in the Immaterium, Khul’tyran is the only Juggernaut permitted to prowl the smoke-choked passageways of the Blood God’s Brass Citadel, as its reward for unbridled destruction.[3]