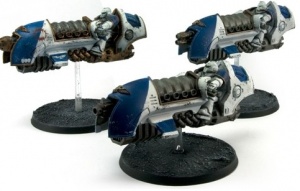 Mounted on Imperial Jetbikes, Sky Hunters were feared strike units boasting considerable firepower on their mounts in addition to their superb speed and maneuvering capabilities. The Jetbike patterns in service with the Sky Hunter Squadrons of the Legiones Astartes are modifications of designs which considerably predated the Imperium and given the materials required to make and maintain them (such as iridium-calicite alloys and repulsor plates), demand for them by the Legions has largely been outstripped. So much so that sometime after the Heresy, Sky Hunter squadrons largely ceased to exist.[1]

Sky Hunters themselves typically operated in squadrons of three, each led by a Space Marine Sergeant. Their Jetbikes, often Scimitar and Bullocks pattern craft, sported a mixture of Heavy Bolters, Multi-Meltas, Volkite Culvarins, and Plasma Cannons.[1][2][3]