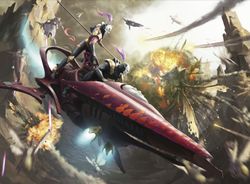 The Skyweaver is a type of Jetbike used by Eldar Harlequins.

The Skyweaver differs from a standard Eldar Jetbike as it has enough room for a secondary rider.[2] Heavily armed and incredibly fast, squads of Skyweavers outmaneuver their foes before cutting them to pieces with concentrated firepower. Their ripping streams of shuriken fire and crackling bolts of electromagnetic energy from its Haywire Cannon slaughter foot troops and reduce enemy tanks to sparking wrecks with equal ease. The secondary Skyweaver rider is typically armed with Star Bolas.[1] The large mask on the front of a Skyweaver conceals a targeting array which may be raised up for access.[4]

In Harlequin myth it is said that to the boon of the Laughing God, the Cosmic Serpents offspring Skyweaver scattered himself across the heavens, each facet telling a subtly different tale of the gods deeds. Thus did the Skyweaver spread confusion amongst the Laughing God's foes, striking down many with its fiery bite when their backs were turned.[2]

Traditionally, a Harlequin Masque incorporates two bands of Skyweavers, their aerobatic prowess serving to add a breathtaking edge of speed and danger to the Harlequins' performances. However some Masques such as the Masque of the Soaring Spite and Masque of the Leering Moon prefer to deploy great swarms of Skyweavers out of ritual acknowledgement.[3] 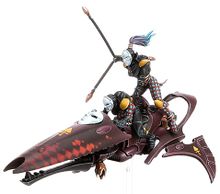