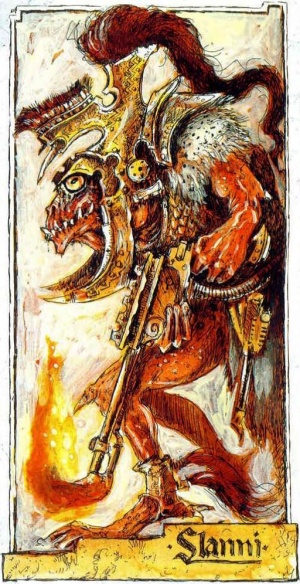 A Slanni warrior as depicted in the Warhammer 40,000 4th Edition Rulebook.[4]

The Slanni,[4][5] also known as the Slann,[1b] are a sentient reptilian or amphibian alien species who have inherited the legacy of the Old Slann.[1b][5][6]

Before the Imperium of Man, and even before the Yldari, the Slanni ruled a mighty galactic domain.[5] The Slann claim to be, and may actually be, the oldest of all the races in the galaxy. During the heyday of their old empire, they discovered and nurtured many primatives species, encouraged their evolutionary process, all while eradicating or moving more dangerous species, and seeding many with livestock.[1b].

When the Eldar first encountered the Old Slann, who were the greatest of all spacefaring peoples, they learned many secrets of the universe from them, including the principles of warp-tunnel engineering, the nature of the warp, and referring to the sentient creatures of the warp as the Powers of Chaos.[3a] While the Old Slann taught the Eldar about the dangers of the warp, they also taught them about its many positive aspects. They taught how the mind of a living creature passes upon death into the warp, where it may, if the individual mind has achieved power, remain whole and immortal as a spirit in the warp. It was the Slann belief that the object of life was to perfect the mind, and thereby achieve conscious immortality as a spirit of in the warp, where it could then reincarnate. However, the Old Slann warned that such an existence were impossible if one's own thoughts were too close to the Powers of Chaos, for one's consciousness would be devoured by a greater Power upon death, with one losing its identity and melting into the greater power.[3b]

The Slah-haii or 'most ancient' represent the benevolent pantheon of gods who created the Hrud, and intended them to bask in the sun and be fruitful. However, this changed when the their deities entered a ruinous war with the Yaam-khoh or 'mirror devils', and were variously slain, crippled or forced to flee.[7]

However, the empire of the Slann eventually dwindled, the pace of their civilization slowed, and their genetic experiments largely abandoned. They do not seem to have suffered from any physical conflict, wars, or disasters. Rather, the reasons for abandoning their active role in galactic affairs and falling into long dream of indolence and introspection appear to be have been driven by a sudden and drastic change in their race's motivations. With their change in motivations, they have lost interest in material conquest and power. It is perhaps the case that the Slann had discovered something yet unknown to other races, a secret of the universe, a spiritual truth or a supreme metaphysical insight.[1b]

The Slann evolved from amphibian stock, with the traces of their anscestry not being difficult to distinguish. Their hands and feet are webbed and long, their skin is cool and moist, and their heads large with potruding eyes. They are comfortable in water and can breathe in water and other poorly oxygenated environments directly through their skin. Slann can vary wildly in colour, with green and blue being common, yellow being well reprsented, and with some scatterings of rarer colour morphs, as well as albino or metallic forms. Slann with bright pigmentation are often extroverted, talented or noteworthy in some way. Slann skin is sometimes mottled, striped, or otherwise marked. On some Slann worlds, especially the primitive ones, markings represent tribal divisions. Slann height is fairly constant, with adults reaching 2 metres, with females being slightly larger and bulkier.[1b]

The Slann inhabit and area north of the galactic pole, living upon a number of proximate and prosperous worlds. They are a closed, but homogeneous society, with similar technical bases, language and culture on each planet. Slann may also live as primitive savages on planets beyond Slann space, including Imperial planets. Such Slann make little or no contact with their more advanced kin. These primitive Slann can be found in settlements throughout the galaxy, likely as a part of greater pattern of galactic settlement. They will rarely trade with other races and are unpredictable in the matter of dealing with territorial disputes or any for of rivalry. The is little the Slann actually want or need, and traders will often get the feeling that they are being watched and studied, and that the actual exchange of goods is of no importance to the Slann.[1b] 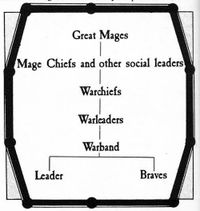 The Slann live in a hierarchical society. The greatest and most respected individuals are the Great Mages, who are sought in battle for their formidable knowledge of magic, philosophy and the arcane sciences. While these Great Mages remain aloof from society, they are nonetheless often sought by social leaders. Slann society is tribal, and the leader of each tribe is known as the Mage Chief. With the exception of the primitive Slann, Slann tribes never fight each other and tribal relations are peaceful. The Slann are expected live according to a strange, mystic and unfathomable ritual, as part of which each Slann passes through life-stages. The call of the life-stage is a seemingly real and unstoppable thing to a Slann, and can happen any time. A peaceful technician may become a wanderer, a warrior, a hermit, etc.[1b]

The concept of a warband is an important aspect of Slann attitude to life. Slann who feel the call to become warriors will either join a tribe's warband, or form their own. Due to the unpredictability of this recruiting method, warbands will change all the time. Slann warriors are known as braves, and the number of braves plus a leader make up a warband. A senior officer known as a warleader commands a group of warbands. Larger armies will have many warleaders, who will meet before battle to discuss plans and exchange ideas with experienced warleaders, warchiefs, and mages. The warleader who is largely in chage is known as a warchief, who is selected from and by other warleaders[1b] The Slann fight for reasons beyond other races' understanding. A warrior fulfilling an important part of its life-cycle sees its immediate goal as fighting, giving no consideration as to why this is. A Slann would think of tactics no more than question the act of war, with their primary objective being fulfilling the 'warrior code'. Defeat is not a Slann concept, and troops doomed in battle must die in combat and attacks should be decisive and never half-hearted. Slann fight for the love of fighting and a gallant defeat is as valuable as a glorious victory. Many Slann believe they are fated to die in battle and are perfectly happy to do so.[1d]

The Slann costume is very exotic, making them look primitive with their fur skins, feathers and religious tokens. This impression is reinforced with skin paint which decorates their bodies, and by the ritual tattooing and scar. These practices are all connected to the esoteric Slann philosophies and their attitute to life, the universe, and their part in it. Braves will often fight for a short time, before being called to some other activity, and as such warbands are in a constant state of flux and uniforms are impermanent.[1c]

In the realms of psychic-philosophy and mystic-technology the Slann have no equals, as they are fulfilling themselves by study of spirital life-forces and the secret powers of other realities.[1b] It was the Old Slann who taught the Eldar the principles of warp-tunnel engineering and of the nature of Chaos[3a]. Amongst the Slann, the Great Mages are the most knowledgeable in arcane sciences.[1b].

In terms of weaponry every tribe maintains a huge stock of weaponry and equipment, often exchanging these items as gifts with other tribes, and many pieces are of incalculable age. Some of the equipment kept is derived from ancient alien culutures now dead or forgotten. However, few of these ancient weaponries will make their way into the hands of Slann braves, who mostly utilize weapons similar to those employed by humans and other races. Typically, a warband will be equipped with lasguns and some may possess special weapons. These special weapons include beamers, D-Cannons, graviton guns, heavy lasers, and other weapons. All Slann braves carry some form of close combat weaponry, often simple hand weapons such maces or clubs. Warband leaders have neuro-disruptors and may have a power axe or glove. The Slann prefer relying on energy field armour, rather than physical armour. Physical armour is worn, but it is more mystical rather than practical, the armour itself taking the form of a padded chestplate, similar in nature and strength to flak armour. Displacer fields are common amongst Slann braves. All Slann carry communicators, and warriors are given photo-chromatic injection.[1c]

After the early editions, the Slann made no further appearances in the setting, though a picture of a reptilian alien known as a Slanni appears in the pages of the Warhammer 40,000 4th Edition Rulebook.[3]

By the fourth edition, much of the background of the Slann is taken over by the Old Ones mentioned in Codex: Necrons. A possible link between the Slann and the Old Ones is implied within the campaign sections of the Codex, which states that the C'tan maintain a hatred of any of the degenerate descendants of the Old Ones, though it is unclear whether the Slann are one of these descendants, or a subject race.[6]