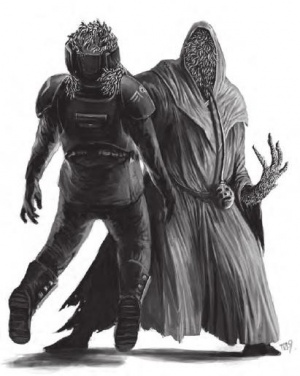 The Slaugth are a xenos race, vaguely humanoid in shape, covered in hundreds of half-melded maggot-like worms. Covered in viscous mucus, they are impervious to all but the most extreme injury.

The Slaugth are believed to be impossibly ancient, likely native to the Calixis Sector long before the arrival of Mankind. Much of their known activity takes place around the region of the Hazeroth Abyss that consists of cursed space and dead stars. Their true homeworld is, however, unknown and may not be located within the Abyss.[5a] Their origins are largely unknown to the Imperium though Rogue Traders and xeno-savants believe that any empire that they hold lies far out the Trailing Halo Stars. The circumstances of the first contact between mankind and the Slaugth is unknown, though some sources claim that they have been encountered on the edge of Imperial space as far back as the Age of Strife.[1b] The abundance of humans in the galaxy has led to them becoming the favoured prey of the Slaugth. Despite this, they seem content to use infiltration and human agents to bring about their incomprehensible plans.[5a]

Many of the encounters with these xenos follow the same pattern, with black, tenebrous vessels entering into Imperial space, where they wreak havoc on isolated outposts or shipping lines. The Slaugth's victims are either left behind as mutilated bodies or disappear altogether. In other encounters, the Slaugth give their vile technologies to renegade humans in exchange for slaves.[1b] Those Imperial worlds that border the Hazeroth Abyss often tell the stories describing the Slaugth as the "worms that walk", a nightmare that emerges from the depths of the Abyss to kill the living and feast on the dead. Ultimately, however, the upper echelons of the Imperium dismiss them as little more than a myth.[5a]

However, the Inquisition knows that the Slaugth exist.[5a] Sealed Inquisitorial archives claim that several frontier worlds in the Segmentum Obscurus have, over millennia, been intentionally thrown into civil war in order to allow the Slaugth to invade and feed on the inhabitants.[1b] But even to those that are aware of the Slaugth, the ultimate goal of these inscrutable schemes remains a complete mystery. All that is known is that all the Slaugth seem to abide by this method.[5a]

In truth, the real reason the Slaugth avoid direct confrontation with the Imperium is that Mankind greatly outnumbers them. Whilst individual Humans are no match for a Slaugth, their greater numbers would mean that their kind would suffer a rapid defeat if the Imperium was provoked into open warfare. Despite this being the case, they are known to be preparing for the day when they will attack the Calixis Sector more openly.[5b]

The Storm Wardens Space Marine Chapter is known to have engaged Slaugth and their warrior constructs on Vigil during the events known as the Cleansing of Vigil. This conflict consisted of a series of bloody, close-range firefights, where conditions were so confined that it was impossible to deploy heavy armour. Whilst the Storm Wardens advanced cautiously and methodically, the Slaugth proved to be adept at provoking the Astartes out of such careful tactics. Casualties grew high as the battle raged on and the Storm Wardens morale was sorely tested but, ultimately, they succeeded in cleansing Vigil of the Slaugth threat, though at great cost to themselves.[4]

In order to feed their constant hunger, the Slaugth have begun to turn their attention to the Calixis Sector and have begun to destabilize the region by fomenting civil war and anarchy. They began by infiltrating the Amaranthine Syndicate when it was a fledgling trade cartel and slowly moved in to control it completely. This patient approach may take several human generations to come to fruition, but it is a plan brilliant in its simplicity, relying on basic human greed.[1a] The Slaugth provide humans with technology, wealth, and trinkets, encouraging mankind to tear itself apart over these items. When their plans have sufficiently advanced, they intend to further infiltrate the major criminal, political, and economic organizations of the Imperium, with the Ecclesiarchy and Adeptus Administratum being likely targets. When the appointed time approaches, the Slaugth intend to see the sector collapse in on itself whereupon they will sweep through the region and have their way.[1b]

Many regard these xenos as a nightmarish myth, born as a void-born tale by mad Rogue Traders. The Inquisition knows them to be a real threat, though it has suppressed all knowledge of them for millennia.[1b] However, the Holy Ordos remain unaware of the fact that the Amarantine Syndicate is now under the command of the Slaugth.[1b] Slaugth activity within the Calixis Sector has also dramatically increased, spreading a network of their agents throughout the region.[1c] There is, however, some dissension amongst their ranks with a splinter faction formed by a Slaugth known as Intendant Recusant who has become consumed by his addictive hunger. This entity is known to have broken free from his dark masters, and now leads Slaugth infiltrators, a cadre of constructs and a faction of Humans from the Amaranthine Syndicate, in pursuit of his own goals.[5a]

The Slaugth are known as "maggot men", "dream eaters" and the "carrion lords" whose bodies and minds are completely alien to humanity.[1b] Their roughly humanoid form stands roughly as large as three meters in height.[5a] This body has hundreds of writhing maggot-like worms covered in a viscous, necrotic mucus. These traits allow them to stretch and reform their bodies at will whilst allowing them to move with on obscene boneless fluidity along with the capacity to regenerate at startling speed. Slaugth are impervious to age, disease, poison and are vulnerable to only the most extreme of injuries. Their alien minds are coldly savage and are psychic voids filled with a monstrous hunger for the dead. They are able to produce necrotic fluids from their body tissues, consisting of flesh-eating bacteria and molecular acids able to liquefy flesh or even burn through metal. The strange technology of the Slaugth combined with their unusual appearance has led many to mistakenly believe them to be daemonic beings.[1d] They are one of the xenos that conceal their true selves and walk amongst Mankind as if they were Humans themselves.[3]

They are known to be an ageless and patient race with a psyche that is incomprehensible to the human mind though they do share one characteristic that others can understand - namely an addictive hunger.[1a] Above all other kinds, the Slaugth crave the dead flesh of other sentient beings, with a particular fetish for consuming cranial matter, which gives them a narcotic experience.[1b] Some say that this allows them to consume the memories and knowledge of their victims[1b], and this theory is based in truth.[1d] Thus, while the Slaugth gain a more pleasurable narcotic experience from consuming rotting brain matter, they prefer to consume fresher brains for the purpose of gathering information. The memories gained from this process fade within weeks unless reinforced, repeatedily used or externally recorded.[1e]

Restraint is not considered a virtue within the racial hubris of the Slaugth, and so they do not see their obsessive hunger as interfering with their intellect. They are known to be extremely intelligent, highly resilient and - by human standards - completely evil.[5a]

Among the known Slaugth are the Principals who serve as Overseers of the Amarantine Syndicate though whether they are a leadership caste or particular cabal is unknown.[1d] Destructors are capable of taking a human guise and have dedicated themselves to the art of destruction above all other pursuits. Destructors are able to revert to their true forms, a nightmarish mass of writing white forms.[2a] Another known rank is the Intendents who also serve as leaders in Slaugth field operations.[5b]

The Slaugth have some sort of connection to the vicious Rangdan of the Great Crusade. During the Rangdan Xenocides, they were observed following in the wake of the Rangdan, harvesting the dead and any survivors for their own obscene purposes.[6b] The Rangdan have also been described as "Slaugth Murder-Minds".[7]

The Slaugth possess a mastery of biomechanical technology and elemental physics which exceeds that of mankind and perhaps even the Eldar. Among their more mysterious capabilities is the capacity to travel interstellar distances without making use of the Warp. Many of their devices are actually grown or augmented pseudo-living machines which blend both flesh and metal in a functional symbiosis.[1b] Their weapons and artefacts appear as products of warp craft to the uninitiated.[1d] This keen and terrible grasp of the biosciences allows them to grow entire armies instead of training them. Their array of constructs can be adapted to serve as guards, spies and even as labourers.[5b]

When they desire to pass unseen and conceal their terrifying form, the Slaugth make use of multi-layered robes and mantles known as Shroud Cloaks which absorb as well as refract light. These cloaks seem to writhe and move as if alive, yet they allow their wearers to pass, at a distance, as misshapen humans.[1b]

Shroud Armour is another form of ragged cloak that allows its wearer to disappear from sight by projecting a strange effect that clouds the perceptions of outsiders thus making them practically invisible.[5b]

Their known weapons include a Necrotic Sceptre, a corroded-looking device that pulses with sickly light and unleashes arcs of eerie moaning energy when fired. Though a potent long-ranged device, it is equally capable of being used as a melee weapon.[1b] Other weapons include the little understood Necrotic Beams used on shock-constructs that can turn their targets into dust. A weapon of rank is the Necrotic Lance used by Intendents, a long-bladed spear made of swirling strands of bilious energy. With a simple command, these lances project devastating bolts of energy that can destroy battle tanks.[5b]

The Slaught's biomechanical constructs induce revulsion in humans, though they differ widely in appearance; in general, most "Vassals" are asymmetrical floating columns of mottled, fungal-looking flesh, covered with pulsing veins, lattices of metal threadwork, and crystalline studs. Their heads are clusters of waving, frond-like sensory growths with skeletal pincer-limbs forming from the body mass when needed.[1e]

A "Harvest" construct appears as a vehicle-sized, amorphous mass of rippling wet flesh that silently floats above the ground. Its mission is to search for sentient matter to consume for its masters, and it pursues this goal with near-mindless persistence, never tiring or relenting. Upon finding a target, a Harvester uses its metallic, pincer-tipped tendrils to pull its prey into its lamprey-like mouth. During this "feeding," the prey's head is separated and preserved in a semi-transparent sack located at the construct's back, storing the brain matter safely for future Slaugth feeding.[2b]

Warrior Vassal Constructs are a more militant version of these biomechnical creations. These pale, oval masses of fungal flesh are filled with purple veins and metal lattices. Movement is provided through three skeletal, spider-like legs with their upper torso consisting of thick, stumpy tubes filled with a mass of tendrils surrounding a radial, fang-filled maw. Each tendril is surprisingly strong and able to stretch into sharp bone blades. These warrior constructs are not limited to their tendrils alone but are also equipped with a beam weapon embedded within their body. This device fires a necrotising beam that is capable of disintegrating a man in seconds.[5b]

Slaugth warships are extremely potent, with their vessels weaponry capable of seriously damaging even a Gloriana Class Battleship in quick order.[6a]