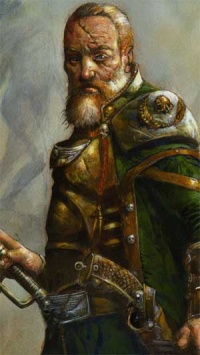 His early career is hard to follow.[Needs Citation] It is known that Slaydo led the Imperium to victory in the Gorikan Suppression[6] but his real fame began during the Khulan Wars[4], during which he mustered a massive army which he led to a decisive victory.[Needs Citation]

Following the Khulan Wars, Slaydo was popular and respected enough to effectively have his pick of campaigns to prosecute. Slaydo, on the other hand, wanted to retire from active duty and become an executive officer, planning to introduce reforms to the structure and operation of the Astra Militarum that he believed would improve its efficiency by as much as sixty percent. However, he changed his mind when the High Lords of Terra offered him command of the upcoming campaign to reclaim the Sabbat Worlds from the forces of Chaos.[6]

Even while still a Lord Militant in the 9th Division Pacificus, he had supported the concept of a crusade to liberate the Sabbat Worlds, and in 732 he had drawn up A Reasoned Approach to the Reconquest of the Sabbat Territories for consideration by the High Command. He had a deep-seated passion for the cause of Saint Sabbat, the original liberator of the Sabbat Worlds, and believed it to be an imperial crime that her hard-won territories had been lost to the hands of Chaos.[Needs Citation]

His huge popularity with the troops, combined with his obvious military genius, led to Slaydo being named Warmaster in 755.M41 by the High Lords, and charged with the liberation of the Sabbat Worlds. Thus, the great Slaydo proceeded to launch the Sabbat Worlds Crusade with characteristic drive and genius.[4][6]

His death came some 11 years later, on Balhaut, a key planet in his plan of reconquest. He landed with his troops and led the assault on the High Palace of the Oligarchy, where Nadzybar, the Archon of the forces of Chaos in the Sabbat Worlds, was residing at the time. The bitter price of the crusade was taking its toll on Slaydo, and he seemed "weary and fatalistic" according to one officer who served with him, but he did not hesitate to lead the first attack wave, power sword in hand.[Needs Citation]

On the 18th hour of the tenth day of the assault, the high palace was penetrated and Nadzybar and Slaydo met face to face, joining in a combat so ferocious that "most were driven to leave the chamber by the fury of it" as one guardsman later said. Slaydo was mortally wounded twice, but through sheer courage rallied through and delivered a lethal blow to the Archon. The Archon's followers swarmed the fallen pair immediately, however, and Slaydo could not be found until the riot of maddened cultists was cleared. There was no hope for the Warmaster by this time, but he lived on long enough to see Balhaut secured. His last words were "I am done, and yet I am undone."[Needs Citation]

Towards his death it is clear that he began to regret the incredibly high cost of life in his campaigns, especially the final assault of his career. He had christened the operation "Hell Storm", and may later have come to regret that name, reflecting that he had consigned his men to a "storm of hell." He also had a strong premonition of his own death on Balhaut, perhaps as early as 756, but this did not stop him from prosecuting the assault to the best of his abilities.[Needs Citation]

He was succeeded as commander of the Sabbat Worlds Crusade by Macaroth.[5]

Early in the Crusade, shortly after the victory on Formal Prime, Slaydo called forty-eight of his officers together for the victory feast. At some point during the festivities, Slaydo became solemn and sad, and when asked what was wrong he replied he was afraid - afraid that he would not live to see the great work done. Slaydo called for a blood oath, and one by one, the assembled officers sliced open their palms with bayonets or table knives and clasped the Warmaster's bloody hand, swearing on their lives that they would continue the work and liberate the Sabbat Worlds, even if Slaydo himself did not live to see it. Slaydo would fall on Balhaut a decade later, just as he had feared.[1]

During the siege of the Shrinehold of Saint Sabbat on Hagia in 770, Colonel-Commissar Ibram Gaunt of the Tanith First and Only related the story to his second officer, Major Elim Rawne. Gaunt had been one of Slaydo's favored, and was one of the forty-eight who swore the blood oath with the great Warmaster. Gaunt had been ordered by Lord General Lugo to remove the Saint's relics from the Shrinehold in the wake of a coming Chaos fleet. Remembering the blood oath after viewing the uncorrupted remains of the Saint, Gaunt chose to disobey Lugo's orders, and would instead defend the Shrinehold from the Chaos forces.[1]

Slaydo wielded Liberatus, a powered sabre gifted to Slaydo by the High Lords of Terra, at the outset of the Crusade. At Balhaut, Slaydo defeated Archon Nadzybar in melee combat. The sword was saved by one of his bodyguards, and later presented to Slaydo's successor, Macaroth[3].