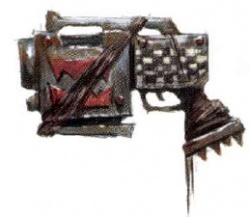 The Slugga is one of the most common Ork weapons, taking the form of a heavy handgun.

Slugga is a huge high-calibre semi-automatic projectile firearm, usually fed from a hopper or clip of ammo. It is often crude, loud and brutish in design and designed to be used in a similar way. Sluggas have very limited accuracy, but huge stopping power, thanks to the massive shot they fire and dangerously large powder charges that propel them. Jams and misfires are common, as is the case with most Ork weapons. It has the potential to kill from a distance or to be used as a deadly close combat weapon, mainly due to its incredible weight. Orks Boyz often equip Sluggas in combination with Choppas, forming up mobs of Slugga Boys.[1][2]

Six-Shoota is a variation of Slugga, its short barrel usually fed from a simple mechanical revolving chamber, usually carrying six shots, hence its name. Ork Mekboys often have their apprentice Spanners making Six-Shoootas until they are good enough to work on more complex weapons. It is the most basic Ork firearm, so simple any Ork boy can make it, given needed bitz. Because of it, there are always a lot of them in circulation in any Ork settlement and it often becomes a first weapon of Ork Yoof. However, given that it is less powerful then slugga and even more prone to jamming, Ork Boys usually acquire more powerful weapons as they grow older and richer.[4]