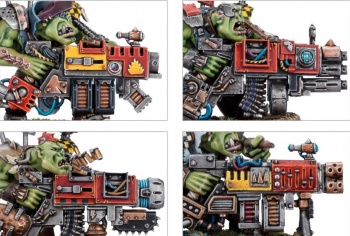 The Snazzgun is a catch-all term for a high-calibre, full-auto weapon constructed by a Mekboy when they are given a large sum of teef by a Flash Git looking for the best weapon around.

These guns intrinsically vary widely in design and general principle of work, so the term may refer to a bewildering variety of kustom and insanely expensive weaponry, much like a Deffgun. However one thing is always true - Snazzguns are always big, loud, rapid-firing, and assuredly deal bloody death. All Snazzguns are unpredictable and deadly on the battlefield, and can always be even further enhanced to make them even deadlier. Common Snazzgun upgrades include:[1b][5]

All Snazzguns are ostentatiously ornamented and excessively enhanced with shiny bitz and snazzy Squig skins in order to satisfy the extravagant desires of their ostentatious owners, who pay a fortune for these overdone weapons. This small fortune often encourages mekboyz to build the shootiest gun possible, be it dumping ridiculously large amounts of bullets into the enemy, firing bolts of raw energy, or some other creative way of blasting whatever is in its crosshairs to oblivion. More often than not, the Flash Git couldn't care less as long as it's good an' killy.[1b][5]