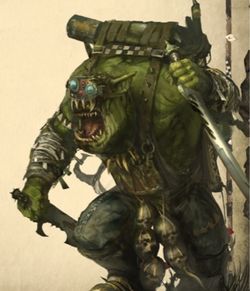 Snikrot is an Ork Kommando.

Snikrot was originally the Kommando Boss for Warboss Killzkar, acting as his personal assassin and executioner. When Killzkar's forces besieged and conquered the mining planet of Dulma'lin, Snikrot led a series of ambushes against the small force of Catachan Jungle Fighters tasked with sabotaging the Ork's war efforts, eventually coming face to face with their leader, Colonel "Iron Hand" Straken. The two engaged in a ferocious duel, with Sknikrot eventually being defeated. Having been seriously injured and plummeting off a building, the Kommando was thought to have been killed.[3]

His tribe was among the first Orks to navigate the forest between Armageddon Prime and Armageddon Secundus during the Second War for Armageddon. Snikrot and his Kommandos were cut off from the rest of the tribe. The majority of his tribe fell foul of the Imperial Guard jungle specialists. Snikrot told his boyz to fall-back and vowed to conquer the environment.[1]

He and his Kommandos stripped down to the bare minimum kit so their bodies blended in with the jungle. They began a campaign of terror and psychological warfare that still plagues the Imperial war effort on Armageddon. Snikrot and his Kommandos were still at large at the start of the Third War for Armageddon 50 years later. His band of Kommandos are called the Red Skull Kommandos, so named for their tendency of scalping their victims. They are the only Orks that the famed Armageddon Ork Hunters fear. In fact the legend of Snikrot is often told as a scary story in Armageddon, for someone with so many legendary deeds and monstrosities attributed to him can surely not be real, can they?[1]

Of late, Daemons have since begun to spill onto Armageddon. Imperial and Greenskins have in a few cases been forced into temporary ceasefires to face the greater threat. Snikrot is disgusted by such compromise, seeing it as weakness and is quick to brutally punish any Ork guilty of it.[4]

Snikrot is a favoured son of Mork, and is armed with two knives the length of a man's arm, named Mork's Teeth, which are supposedly blessed by his patron god.[1] 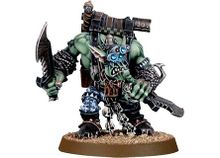