Sniper rifles are long-ranged and highly accurate rifles, mainly used for assassination. Small groups of snipers, and even lone snipers, can hold back the advance of an enemy force many times their number, pinning them in cover. Both Imperial and Eldar forces use sniper rifles to great effect.

Many forms of sniper rifles are longer ranged and high-accuracy variations of existing firearm types. The least advanced sniper rifles use solid bullets, but some lasguns are lengthened to allow them to be used in a sniper role.[Needs Citation]

There are several differences between solid-slug rifles and energy based rifles. Because a laser bolt travels much faster than a solid slug, a Long-Las is an instant hit weapon and therefore offers pinpoint accuracy; the major disadvantage of using a long-las is that the beam reveals the sniper's position when fired, while a solid-slug rifle offers better concealment if equipped with a noise suppressor.[Needs Citation]

Most weapons have specialist sights added on to enable them to pick out specific targets such as officers.[Needs Citation] 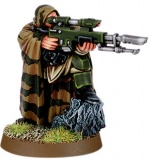 The long-las variant of the standard lasgun is a very potent weapon. Using highly charged power packs called "Hot Shots" they can take the head off an enemy with one well-placed shot.[Needs Citation]

Needle sniper rifles (or Needlers) are used by some sniper and assassin units of the Imperium. Needlers fire a needle of crystallized toxin, propelled by a form of laser technology that is invisible and flashless, allowing the weapon to be used without giving away the sniper's position. The beam which propels the sliver gives the Needler unerring accuracy, driving the toxin to its target. The secondary function of the beam is to pierce any existing armour and provide an opening for the sliver to penetrate.

Needlers are silent and the sliver itself is so fine that it is not felt even if it penetrates flesh. The crystallized toxin dissolves almost immediately after penetration. The toxin is extremely fast-acting, taking effect in a matter of a few seconds.

Various types of toxins can be employed by the Needler, the most common three being lethal neuro-toxins, sedatives which induce temporary coma, and intoxicants which stupefies the victim, putting him in a completely passive state.

The needler's main drawback is its poor armour penetration.[1][2]

High-powered customized sniper rifles are the characteristic weapon of Vindicare Temple assassins, and are feared by troops for their ability to take down even the most heavily armoured infantry with a single shot. Vindicare sniper rifles can make use of anti-tank rounds to penetrate otherwise impenetrable armour.

The Mark IX Sniper rifle is a heavy Needler sniper rifle used by the Deathwatch chapter of the Space Marines for long-range anti-personnel and anti-materiel work.

At just over two metres in length and weighing close to fifty kilograms, the Mark IX allows a Deathwatch sharpshooter to engage targets with incredible accuracy at very long ranges.

A highly-respected and revered weapon, it is often selected as the weapon of choice for Space Marine snipers in many Deathwatch Kill-teams. Each Mk. IX has the following integral systems:

Mk.III Shrike Sniper Rifles are Bolt Weapons utilized by Vanguard Eliminators. The optical sights of this weapon can be tailored for any situation, from thermoscopic vision to precision auspex scans that can penetrate several feet of solid matter. Once locked on to, there is nowhere for an Eliminator's prey to hide. Each member of the squad carries spare magazines filled with special ammunition, tailored for every eventually. Hyperfrag rounds detonate in a shower of shrapnel, Executioner rounds are sophisticated self-guided missiles slaved to a miniaturized cogitator that can seek their target from behind cover, while mortis rounds spew self-replicating mutagenic toxins into the flesh of a target.[7]

A large calibre anti-materiel sniper rifle with a bipod that uses the same ammunition as the autocannon meant for knocking out enemy equipment, suppressing light vehicles, and eliminating enemy combatants in a single hit.[6]