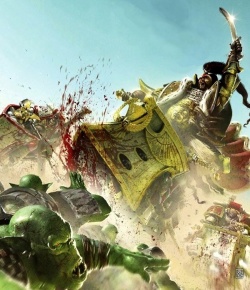 The Sojutsu Pattern Voidbike was an early prototype Imperial Jetbike, that predated the more common Scimitar Pattern in use with the Legiones Astartes. During its initial trials, the Sojutsu's thrusters were capable of granting the Jetbike limited periods of true flight, and even some maneuverability in space. As a result, it was classed by the Logisticae Imperialis, as an ultralight fighter craft instead of a Jetbike. The Primarch Jaghatai Khan, was known to have retained a specially engineered version of the Sojutsu for his own use. Its enhanced thrusters were capable of carrying the Primarch into battle, with a swiftness that equaled the lesser Jetbikes used by his Legion.[1]