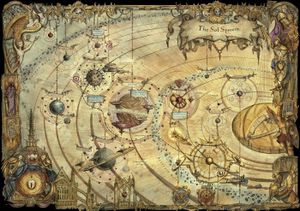 Map of the Sol System

The Sol System or Terran System is the name of the Solar System in the Age of the Imperium. The system is named for its sun, and is part of the Segmentum Solar. Its planets include Holy Terra and Mars.

The birthplace of humanity on the planet Terra, the Sol System was fully colonized by humans by M15.[6] During the Dark Age of Technology humanity expanded across the stars thanks to the invention of Warp Drives and Navigators, and in this period the Sol System was dominated by the empires of Terra and Mars which coexisted peacefully.[7] During the Age of Strife, the Sol System fell into complete anarchy. Terra collapsed into wars between Techno-Barbarians while Mars reverted to complete isolation and religious worship of technology.[8] Salvation only came with the coming of the Emperor, who unified Terra, Mars, and then the entire Sol System into the fledgling Imperium during the Unification Wars and Great Crusade.[7]

During the subsequent Horus Heresy, the Sol System was the site of bitter fighting between loyalists and traitors during the Schism of Mars and Solar War. At the final phase of the war Horus' forces succeeded in capturing the Sol System and besieged Terra itself, but were eventually defeated and repelled during the Great Scouring. Since that time, the Sol System has not been the site of all-out war though it did see fighting during the War of the Beast[9], Age of Apostasy[10], and recently the Battle of Lion's Gate.[11] The System was also saw a minor but mysterious Necron raid on Mars in late M41.[12]

During the Noctis Aeterna the Sol System was threatened by the Khornate Crusade of Slaughter but subsequently defeated by an Indomitus Crusade fleet under Cassandra VanLeskus.[13] In addition, Ganymede became infested with Daemons and the Grey Knights were forced to purge the planet.[14]

Other celestial objects in the Sol System include The Comet and Artefact 9-Kappa-Mu.

As the center of the Imperium, the Sol System sports the heaviest known defenses in the Galaxy. At the very edge of the System near the Mandeville Point are arrays of Star Forts garrisoned by Regiments of the Imperial Guard. The rest of the outer System is densely laced with thousand-mile-wide minefields, Imperial Navy patrol monitors, and enormous Hunter Servitors. Past these is the core defenses of the system, most notably the enormous Battlefleet Solar of the Imperial Navy. In addition to these forces, the Grey Knights, Inquisition, Adeptus Mechanicus, and Adeptus Arbites all have substantial forces in-system deployed through endless bases, stations, and garrisons. At Terra itself orbits the massively powerful Imperial Fists battlestation known as The Phalanx. Due to the massive daily influx of zealots, adepts, bureaucrats, merchants, pilgrims, etc. daily security is screened heavily by the Adeptus Custodes. The Custodes maintain surveillance stations and listening devices throughout the System.[3]

Known Star Forts in the Sol System include the Oracle Maximus, Prescience, Taon Aegis and Eyrie Prime. These are overseen by the Adeptus Custodes.[15]