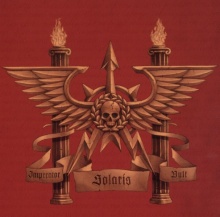 Symbol of the Solar Auxilia

The Solar Auxilia was an elite fighting force within the Imperialis Auxilia during the Great Crusade and Horus Heresy originating from the Segmentum Solar. Of the myriad regiments and battalions of the Imperialis Auxilia (known in Low Gothic as the Imperial Army) the Solar Auxilia were amongst the most elite, disciplined and well-equipped fighting forces, widely considered by many second only to the superhuman Legiones Astartes in their military effectiveness in battle.[1] Solar Auxilia soldiers were not only trained as infantrymen but also for space combat, combat engineering, planetary exploration, and Death World survival missions.[2b]

By the second century of the Great Crusade, the Solar Auxilia made up between 20-25% of the Imperial Army.[2b]

The Solar Auxillia was founded in the early days of the Great Crusade as the forces of the Emperor required fleet-based armies capable of dealing with "petty wars" and colonial suppression while the Legiones Astartes handled grander campaigns. Imitating the Void Hoplites of the Saturnyne Ordo, the Solar Auxilia were trained, armed, and deployed in the same fashion and were issued with the same Saturnine Void Armour. Their doctrine emphasized discipline, coherence, aggressive defense, and concentrated firepower, making them highly effective soldiers. The first ten Regiments of the Solar Auxilia were known as the Saturnyne Rams and were more or less the Void Hoplites of the Saturnyne Order. Soon, more regiments were raised from Terra and Luna in addition to Saturn. As the Great Crusade ground on, the Sol System could no longer provide enough manpower for the much-demanded Solar Auxilia forces, so recruits were drawn from elsewhere.[2b] These new recruits were mostly typically drawn from regions with a strong privateer and naval tradition.[9]

During the Crusade, the most common mission for Solar Auxilia units was to serve alongside Rogue Traders and Expeditionary Fleets as aggressors and explorers. Once a fleet had achieved compliance and moved on, it usually fell to the Solar Auxilia and its assigned warships to guard those worlds and systems from outside threats as well as rebellion. Only when Compliance was guaranteed beyond a doubt would the Solar Auxilia oversee the creation of locally-raised Imperialis Militia forces and redeploy elsewhere.[9]

During the ensuing Horus Heresy, the Solar Auxilia became a key asset of loyalist forces. One of their most notable campaigns was the Battle of the Coronid Deeps.[2b]

The base operating unit of the Solar Auxilia on the strategic level was the Regiment, comprising about 5,300 soldiers and staff. However as the Great Crusade expanded in size, much larger Solar Cohorts were established of 120,000 personnel under the command of a Marshal Solar. These would be broken into a number of sub-cohorts, each with a nominal strength of 1,200 under a Legate Commander, Commander, or Sub-Commander depending on its particular type.[2b]

On the tactical level, the building block of the Solar Cohort was a Terico, itself made up of three sections whose nature was defined by their weaponry and battlefield role. The most commonly deployed Terico formation consisted of three sections each comprising 20 armored Lasrifle-equipped troops. Veteran Veletaris Tericos usually consisted of three squads of ten veteran troops equipped with more advanced short-range weaponry such as the Volkite Charger or Flamer. Fire Support Tericos commanded three batteries of crew-served weapons platforms, most commonly the Rapier.[2b]

The elite of the Solar Auxilia were the Veletaris Storm Sections. These warriors were second only to the Legiones Astartes in combat ability[4]. The Solar Auxilia were also accompanied by Medicaes, who were tasked with treating combat injuries in the heat of battle. They were well-equiped and were trained to the Imperium's highest standards, which allowed the Medicaes to keep even grievously wounded Auxilia in the fight.[8]

The most iconic piece of the Solar Auxilia was its Solar Pattern Void Armour, a carapace-reinforced full environmental combat body suit with fully integrated life support units. The most commonly issued weapon was the Kalibrav V-1 pattern Lasrifle, a higher-quality Laser firearm superior to a standard Lasgun. Support weapons included Flamers, Volkite Weapons, Plasma Weapons, Rotor Cannons, and Meltaguns. The Solar Auxilia also had its own units of Ogryn Charonites for infantry support.[2b]

The Solar Auxilia made use of a wide array of heavy vehicles, most notably the Dracosan Armoured Transport and Aurox. The Arvus Lighter was most frequently used for airborne landing operations. The most common heavy support vehicles were the Leman Russ Battle Tank, Malcador Heavy Battle Tank, Basilisk, Valdor, Malcador, and a variety of Super Heavy Tanks that included the Baneblade, Stormhammer, Stormblade, Stormsword, and Shadowsword.[2b]

The Auxilia operated its own air units which included Thunderbolts, Lightings, and Arvus Lighters. For boarding operations in space, the Shark Assault Boat was most commonly employed.[2b]