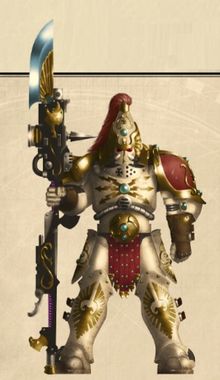 The Solar Watch are a Shield Host within the Adeptus Custodes.[1]

The Solar Watch (also known as the Castellans of the Blessed Worlds) have sworn binding oaths to keep guard over the Sol System and see themselves as the first true line of defence for the Imperial Palace. Consisting of several Shield Companies of varying strength, the Solar Watch constantly patrol routes between the worlds and void structures of the Sol System from the orbital fortresses of Luna to the deep-space star forts of the Halo Belt (except Mars which Solar Watch trust to maintain to Adeptus Mechanicus themselves), to ensure that no external threat ever makes it as far as Terra. Though they typically travel via naval craft and intrastellar trade ships, the Solar Watch maintain a formidable concentration of Venerable Land Raiders and are typically able to deploy forces that are predominately, if not entirely, mechanised. This ensures they respond swiftly, and with overwhelming force, to any potentially threatening situation that may develop and has allowed the Solar Watch to put an end to Daemonic Cults, Inquisitorial coups and subtle Xenos incursions on every world bar Mars.[1]

While their authority technically does extend to the Red Planet, the Custodes are wise enough to maintain cordial relations with the servants of the Omnissiah, and so travel to Mars only occasionally, trusting instead that the Adeptus Mechanicus will police its own deviants. Despite being charged with the Sol System's safety though, the more aggressive of the Custodes' Captain-Generals have traditionally charged the Solar Watch with dealing with threats in the Systems closest to Terra. These engagements are referred to as Talon Sorties, but the Solar Watch does not waste their resources in war zones already heavily invested in by Imperial forces. Rather, they sally out to destroy developing threats or eliminate enemies that have broken existing Imperial lines. However, once they have crippled their enemies' capacity to function as an army of conquest, the Solar Watch will abruptly withdraw back to the Sol System and leave the Imperium's lesser forces to mop up what remains.[1]

Main colours of the Solar Watch - marble-white armour and red shoulders and tabards.[1]