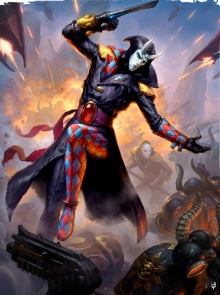 Solitaire before striking a killing blow[4]

Solitaires are Harlequins who have, through some means, lost their souls. At death they are doomed to be claimed by Slaanesh. Only through a gamble by the Laughing God can they be saved.[4]

They are outsiders, even among the Harlequins, and roam the universe alone, occasionally joining a masque for a single performance or battle as the fancy takes them. They almost always fight as individuals. In the Harlequin masques, they play the part of Slaanesh, as all others who attempt to play this part are driven mad by the experience.[4]

The Solitaires seek out Eldar considered promising and able to survive the trial that all Harlequins must endure. Though they are capable of speech, they do not speak and are not spoken to, except in ritual form during a performance. It is said that any who accidentally addresses or touches a Solitaire is cursed, and would be better to take their own life outright.[4]

In combat, a Solitaire is a deadly marvel, a dazzling blaze of light and colour that leaps, spins and attacks with blinding speed. Their art of dance is so advanced that the enemy's bullets, rays and shells can not hit them and every graceful sweep of his weapon decapitated their terrified enemies. It is said that each Solitaire is the equal of a full squad of lesser warriors.[4] As they are without souls, psychic powers have no effect on them, and they are completely fearless. All who stand in their presence are filled with an uneasiness, and somehow sense that they are with a being who should not be.[Needs Citation]

Solitaires are among the few that can freely enter the Black Library of Chaos.[Needs Citation]