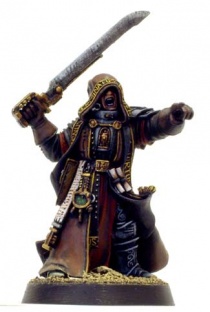 Solomon Lok was the Ordo Xenos Inquisitor charged with investigating the sudden loss of contact from a research facility on Beta Anphelion IV in 850.M41. Solomon Lok was an Ordo Xenos Inquisitor, veteran, notably, of the Chincare Hrud Infestation. His retinue consisted of Autosavant Wassily, who kept a log of the Anphelion incident to the end, Astropath Zarneck, who transmitted the log to Lord Varius, Lok's superior, a servo skull, and Major Durra, Detachment D-99.[Needs Citation]

He, the Elysian Drop Troops 99th 'D' Detachment (led by Major Durra), a detachment of the Cadian 226th, an Adeptus Mechanicus Biologis Exploritas force headed by Magos Biologis Arthon (seconded from forge world Gryphonne IV) and a task force of the Red Scorpions chapter (led by Carab Culln) went into orbit above the clouded moon. After a fierce battle on Beta Anphelion IV, the Red Scorpions received orders to evacuate themselves, and only themselves. The transport requisitioned for the mission refused all of Lok's requests, stranding Lok and the small force of survivors on the moon as the Tyranids closed in. In the last battle, Lok succeeded in taking down an Hierophant Bio-titan, only to see two more stride out of the ammonia fog. Lok died betrayed by his superiors and his faith.[1]