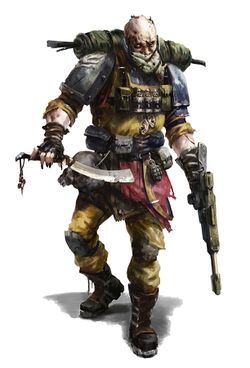 A Son of Sek

The Sons of Sek were a Chaos warband and militarized Chaos Cult which operated in the Sanguinary Worlds and Sabbat Worlds in M41. It was founded and initially led by Magister and Anarch Anakwanar Sek, and modeled on the Blood Pact.

The Sons of Sek were created during the Imperial Sabbat Worlds Crusade. They were not just supposed to be a highly effective fighting force which would counter the advancing Imperials, but specifically created by Sek with the intent of eventually mounting a coup against the forces of Archon Urlock Gaur. This would have given Sek command of all Chaos forces in the Sabbat Worlds.[1] The Sons of Sek were primarily formed and trained on the Chaos-held world of Gereon, until the reconquest of that world by Imperial forces.[2] In addition, the Sons seized control of a number of other planets to fuel their need for weaponry,[6][7] including Industrial Worlds.[7]

After the Imperial raid on Salvation's Reach, open war erupted between the Sons and the Blood Pact, weakening the Chaos forces in the Sabbat Worlds.[5] In 792.M41,[9] the Sons of Sek and the Imperium fought for control of Urdesh;[6] during this battle, Anakwanar Sek was killed. This event threw the Sons into disorder; many of those who experienced the psychic shockwave of his death went insane or simply died.[5] A large section of the cult subsequently retreated rimward towards Xerxes. Meanwhile, the surviving commanders of the Sons struggled for control of the cult, even as they were beset by the Imperium and the Blood Pact. In 794.M41, a Damogaur named Gerik reached an epiphany during a Chaos ritual to determine Sek's successor, and became the new bearer of the voice.[6]

Like the Blood Pact, the Sons of Sek were organized and disciplined in a manner similar to the Imperial Guard, with additional refinements devised by Sek - for instance, the Sons of Sek incorporated an analogue to the Imperial Guard's commissariat, which the Blood Pact did not.[1] The Sons were split into battlegroups known as Sanguinaries[5] and smaller units known as packsons.[6]

Additionally, the Sons believed in "the voice which drowns out all others"; this voice was seen as a holy conduit for the Chaos Gods and it consumed the Sons to the extent that they heard it in their thoughts. The voice could be transmitted by technology and sorcery, inspiring the Sons to fanatical bravery; it also worked as a mild form of mind control.[5][6] The status of bearer of the voice ensured that Anakwanar Sek initially held total control over the Sons, with many regarding him as an exalted and immortal being;[5] however, some Sons distinguished between the individual and the bearer, believing the voice both a blessing and a curse: On one side, it exalted a human and designated the leader of the Sons, but it also consumed the individual, ultimately leaving only a vessel for Chaos. In this way, some Sons also rationalized Anakwanar Sek's demise, believing that too much individuality had remained within him to truly shoulder the voice.[6]

The Sons mainly recruited inhabitants of the Sanguinary Worlds and individuals born on Chaos-controlled worlds.[5][6] However, they also tried to capture soldiers of the Imperial Guard and then force them to defect; their methods were usually brutal in this regard, and any prisoners who refused to submit were ultimately killed. Other Sons of Sek often regarded ex-Imperials with suspicion, suspecting that they might harbor lingering loyalty to the Emperor.[5]

Each member of the Sons of Sek wore a badge of Magister Anakwanar Sek's hands over their mouths. While the warbands' serfs wore a cloth version of the badge, the Sons themselves wore one made out of Human flesh. The Uett-magir had the images of Sek's hands tattooed around their mouths,[4b] while the Lekt had his hands' images burned directly onto their skin.[4a] Most Sons wore charms with Chaos symbols.[8]

In regards to any other equipment, the Sons of Sek varied by battlegroup. Many Sons were limited to rag-tag equipment, much of it plundered from the Imperium or the Blood Pact, and had no real uniform.[5] Other Sons of Sek, especially those stationed on and supplied by Industrial worlds wore vests, helmets, and clothing which at least resembled uniforms.[7]

The Sons of Sek were led by generals known as the Uett-magir.[4b] Mid- and lower-ranking commanders included the Etogaur,[5] Damogaur, and Sirdar.[6] The Commissar-equivalents were called Scourgers,[7] while elite soldiers among the cult were termed Excubitors.[5] The Lekt acted as battle psykers and Astropaths.[5] 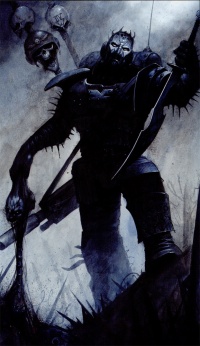