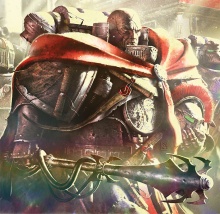 Sor Talgron in the original colors of the Word Bearers 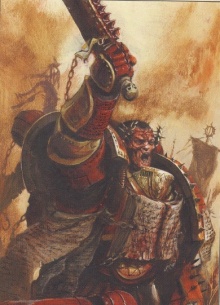 Sor Talgron in the heretical colors of the Word Bearers

Sor Talgron, later known as The Warmonger, was a member of the Word Bearers Chaos Space Marine Legion.[1]

Born among the lower castes of Colchis, Sor Talgron was inducted into the Word Bearers Legion at some point during the Great Crusade. His mentor, Volkhar Wreth, predicted that he would rise far within the legion and was proven right when Talgron was elevated to Captaincy of the 34th Company. Talgron was present when his legion was humiliated for their worship of the Emperor at Monarchia, and although not particularly devout, especially by Word Bearer standards, he carried the shame of that moment for many years afterwards.[1]

During the Great Crusade as part of the Perpetual Spiral Chapter Talgron participated in the war against the inhabitants of Forty-Seven Sixteen despite advocating for their re-education rather than destruction and was one of the first marines to reach their central citadel, where he was horrified to discover that the people of the planet worshiped the Emperor and that the war against them had been a mistake. Alerting legion command, he was further confused when Lorgar, Erebus and Kor Phaeron ordered the people massacred, unaware that his legion's commanders had secretly turned against the Emperor. Despite his confusion his faith in Lorgar proved strong enough for him to accept the event and he joined his superiors in betrayal.[2]

Shortly after, Talgron and the 34th Company were dispatched to Terra, ostensibly to maintain a Word Bearers presence in the Sol system and assure the Emperor of Lorgar's loyalty but in truth to covertly pave the way for the eventual invasion. When news reached Terra that Horus had betrayed the Imperium Rogal Dorn summoned Talgron to the palace and ordered him and his garrison to join the rest of the Seventeenth Legion in mustering for the loyalist counter-attack at Isstvan V. Dorn also released Talgron's old mentor Volkhar Wreth, who was serving on Terra as the only Word Bearer representative in the Crusader Host, into his custody. Before leaving the palace Talgron lured Wreth into an ambush and along with Dark Apostle Jarulek converted him into a living conduit that would allow daemons to breach the palace when the time of the invasion came.[1]

Talgron left Terra shortly after, commanding the 34th Company in the Shadow Crusade during the Horus Heresy. During the Percepton Campaign Talgron hunted down a team of Ultramarines that had retreated to an underground bunker but was too late to prevent them from triggering a bombardment of phosphex bombs that burned away all life on the planet. His flesh melting into his armour, Talgron was rescued from the surface and died on the apothecary's slab, but in near-death experienced a vision of Lorgar that opened his mind to the wonders of Chaos and allowed him to live. His body rebuilt with a mixture of augmetics and Warp-mutations, Talgron became a Dark Apostle.[1]

Talgron was badly wounded once more during the Battle of Terra and subsequently had his remains entombed in a Dreadnought.[Needs Citation]

After the Heresy Talgron became a feared Chaos Dreadnought known as The Warmonger. Due to his formidable mental power, he was the only Dreadnought on the Word Bearer's ship Infidus Diablous who retained some of his sanity, though he often remembered the Siege of Terra while in the heat of battle. He was killed during the Battle for Boros Prime when he attempted to kill the Undying One, the Necron Lord's death explosion finally ending his life. His shell was later inhabited by Burias Drak'Shal.[3][4]