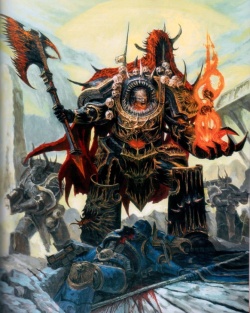 Chaos Lords are the leaders of many Chaos Space Marine forces.

Chaos Lords are not necessarily those who rose through the ranks properly in a hierarchical fashion, but are often those most blessed by the Chaos Gods or simply the most powerful or charismatic. The greatest Chaos Champions become Chaos Lords and are often granted with mutations and alterations by the gods to further their cause. Chaos Lords are so powerful as to be able to bind the forces of Chaos to their will, although this often brings a dangerous position as advancement is commonly achieved through killing their leader. Some Lords lead through brute strength, others through cunning and some are maniacs bent on self-aggrandizement. Others are truly worshipers of Chaos with a zealous dedication to the dark gods.[1]

Champions often come with a mark of one of the four Chaos Gods. Champions of Khorne are savage and value physical strength and combat over cunning and strategy. Tzeentchian champions are often very knowledgeable and many of them are sorcerers. Champions of Nurgle are the most distorted and physically corrupted of Chaos' followers, their bodies dulled from pain enabling them to endure physical injury with little trauma. Slaaneshi champions are often those who seek the most intense pleasures possible and are often physically the fastest Chaos warriors due to their hyper-sensitive minds.[1]

In 3rd Edition, a Chaos warband was typically had two commanders, a Chaos Lord and a Chaos Lieutenant, the latter of which had psychic ability and played the role of a Sorcerer.[Needs Citation]

Since 4th Edition however, Sorcerers play a role in a Chaos warband more analogous to a Librarian in a group of Space Marines. Sorcerer Lords are Chaos Lords with psychic powers, and are often followers of Tzeentch.[2]