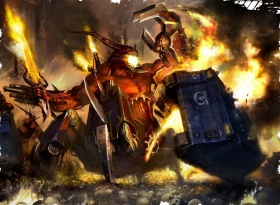 A Soul Grinder destroying a Rhino[6]

The Soul Grinder is a daemonic war machine used by the daemons of Chaos, said to originate from the Forge of Souls.[Needs Citation]

In daemon armies, the Soul Grinder plays a role roughly equivalent to that of a battle tank in conventional armies. It is well armoured, appearing as a six-legged construct with a roughly humanoid upper body. There is a passing resemblance to the Chaos Defiler, but the background states that Defilers were commissioned by Ezekyle Abaddon while Soul Grinders are from the Forge of Souls. Soul Grinders possess impressive durability, firepower, and strength compared to the rank and file daemons.[4]

In the ash plain outside the Forge of Souls, daemons battle each other for the chance of fusing with the mechanical constructs of the daemonic smiths. This is because, unlike mortal bodies, these steel and ceramite shells can sustain a daemon in realspace almost indefinitely. Before being released, each new Soul Grinder must take the Three Oaths of the Iron Pact with the Masters of the Forge:

The Soul Grinder is armed with close combat weapons appropriate for it's size such as the Warpsword and Iron Claw, as well as other weapons such as the rapid firing arm-mounted Harvester Cannon and a deadly face-mounted Mawcannon. It also can fire bolts from their single eye, known as Warp Gaze. Some can also vomit force a mass of mutating ichor over large distances, known as Phlegm Bombardment.[1]