The 2nd Edition of Space Hulk board game released by Games Workshop.

The second edition of Space Hulk features the Space Marine combat veteran of the 1st Company Terminators against Genestealer infestation on board huge space wrecks drifting through the warp and space called "Space Hulk". A game system

The box for the second edition incorporates the rules of the first edition of the game, to which minor changes were made. The main differences are: the hourglass and the time limits have disappeared, while he is no longer possible for the Space Marine player to play at the round of his opponent through action points. Finally, specific dice were added to resolve the jets of fire and determine the containment of weapons. 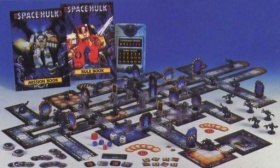 This version contains new versions of the 6 original missions from the 1st edition and adds 12 new missions.