From Warhammer 40k - Lexicanum
(Redirected from Space Hulk Mission Book (3rd Edition))
Jump to: navigation, search
Space Hulk 3rd Edition is a two player board game released by Games Workshop in 2009 as a limited edition. There are no current plans to reprint the game. Set in the Warhammer 40,000 universe, the game takes place on a Space Hulk and pits a boarding force of Blood Angel Terminators against a brood of Genestealers.

Years ago in 996.M40 a large Space Hulk was detected passing through the Secoris System close to a populous hive world. Because of its proximity to busy trade routes in the system, it could not be bombarded for fear of the resulting debris threatening trade ship navigation. Instead the Blood Angels enacted a full-scale boarding action. What they encountered inside was tens of thousands of Genestealers rousing from hibernation. Of the entire Blood Angels chapter aboard the hulk, only fifty survived. A little more than six hundred years after what happened at Secoris, another Space Hulk was reported within a few light years of Baal. Seizing the chance to redeem their past failure and restore their chapter's pride, over eighty members of the Blood Angel first company under the command of Captain Michaelus Raphael boarded the hulk, which they give the title the Sin of Damnation. Captain Raphael quickly located a dormant nest of Genestealers, and moved to eradicate them. With a mix of cunning and sheer, brutal force, the Blood Angels manage to first isolate, and then eradicate the entire Genestealer population through the use of poison gas.[1]

List of Blood Angel characters playable and supplied with models in the Space Hulk board game: 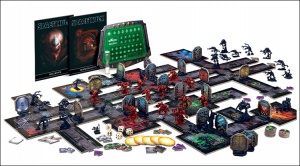 Space Hulk is a two player board game where one player controls the Space Marines and the other controls the Genestealers. The game is played on a modular board of various corridor and room tiles that can be freely arranged and locked together to build different missions. Each model has a set amount of action points which limit how far it can move each turn, or how many times it can shoot or fight in close combat. A sense of tension is added to the game through the use of hidden play mechanics, including hiding the actual number of Genestealers in play from the Marine player because they came into play as 'blips' which can represent 1-3 creatures, and Marine player having a number of command points hidden from the Genestealer player that may be used as extra action points for the Space Marines.

Free rules providing guidelines for players to design their own missions have been released on Game's Workshop website.[1]