Space Marine by Ian Watson was the third Warhammer 40,000 novel to be published by Games Workshop. It appeared in 1993 - three years after Inquisitor, also by Ian Watson (later re-named Draco), and Deathwing — a compilation edited by David Pringle.

Three young Imperial Fists, newly recruited to the Chapter, go from their formative years in the underhive gangs of Necromunda, through their trials and being chosen by the Chapter, to fighting as part of the renowned First Company on a mission into the depths of a tyranids hive ship. 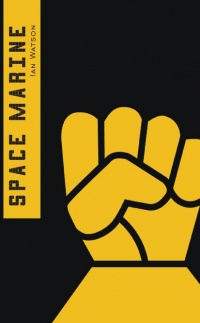 Cover art for the 2010 edition