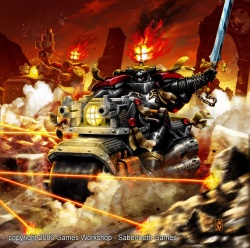 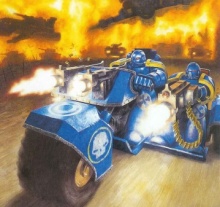 A Scout Bike Squadron is a mounted, rapid-strike version of the Scout Squad. The squadron is made up of a Sergeant and between two and four Scouts, all mounted. All wear lighter Carapace Armour, but are excellent at scouting out forces a long distance away, which would take too long for Scouts on foot to investigate.[3] The bike is usually armed with either twin-linked Bolters or an Astartes Grenade Launcher, while the rider typically carries a shotgun, bolt pistol, combat knife, frag grenades, and krak grenades.